In some cases, dense breast tissue can be associated with an increased risk of breast cancer.

A 2017 U.S. study revealed that four in 10 cases of breast cancer in younger women can be blamed on high breast density. The results show that breast density is a much more important breast cancer risk factor to be aware of than a person’s family history. But having dense breasts is not an abnormal condition. In the United States, 43% of women over the age of 40 have dense breast tissue. It’s basically a physical attribute of the body and there’s little anyone can do to actively change or improve the density of their breast. 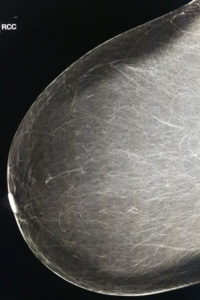 Allison Gleason, RT (R) (M), an OSF HealthCare supervisor of mammography and ultrasound, said it’s important to remember that the density of a woman’s breasts can change over time. That’s why it’s important to get annual mammogram screenings to stay up-to-date on the condition of your breasts. Remember to continue to getting routine screening mammograms even when additional exams are suggested for you.

The more fibrous and glandular tissue absorbs more radiation during mammography, reducing the accuracy of the test and making it more difficult to properly diagnose breast cancer. Dense breast tissue shows up white on a mammogram, as do tumors, which makes it more difficult to identify the difference.

According to the American Congress of Obstetricians and Gynecologists, a mammogram will identify 88% of cancers in a breast that is almost entirely fat, or low in density. That’s compared to 62% in high-density breasts.

Dense breast tissue may obscure or hide breast cancers on a mammogram –– potentially delaying diagnosis in these women. Both dense breast tissue and cancer appear white on a mammogram, creating a dangerous camouflage effect and a dilemma for radiologists whose goal is to find breast cancer as early as possible. ABUS will allow us to better meet the health needs of women as they receive their annual screenings.

Had your annual mammogram?

“If you happen to be a patient that has been identified as having dense breast tissue, it is important to understand your options to ensure the best possible imaging studies are performed for confidence in imaging results.”

Two of the best imaging techniques for screening dense breast tissue include having 3D (tomosynthesis) yearly with your annual screening mammogram and ABUS (Automated Breast Ultrasound) once identified as having dense breasts. 3D mammography has been shown to greatly reduce detection challenges associated with overlapping structures in the breast. The low-dose 3D mammogram exam takes just 3.7 seconds per view resulting in greater patient comfort and a reduced chance of patient motion.

With an order from a primary care provider, ABUS can be scheduled to be completed during the same setting as an annual mammogram.

If you receive a report indicating you have dense breast tissue, speak with your doctor about your breast tissue density and family history of breast cancer to determine the best imaging options. Additionally, you should check with your insurance provider for coverage on 3D (tomosynthesis) and ABUS.