Babies born with less than 30 weeks gestation generally have more obstacles to overcome compared to a full term infant. By the time they reach school age, it is estimated that 50 percent to 70 percent of low birth weight infants are identified to have some cognitive, behavioral and/or social delays. These difficulties often times don’t resolve with age and can persist into adulthood.

As a national leader in neonatology, OSF HealthCare Children’s Hospital of Illinois saw a need for specialized care for babies born before 30 weeks gestation. In the fall of 2016, OSF Children’s Hospital implemented the Small Baby Unit (SBU) within the Neonatal Intensive Care Unit (NICU). With many different specialists providing patient-focused care, the goal of the SBU is not only survival, but an improved quality of life for each infant.

When the unthinkable happens 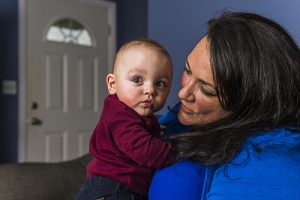 Marilyn Holcomb and Joe Penn of Normal were expecting their first child. Marilyn had experienced a fairly normal pregnancy.

“It was one of the worst days of my life because I had no idea what was going on,” Marilyn said. “I was devastated.”

Marilyn spent three weeks in the antepartum unit at OSF Saint Francis where she and her baby were closely monitored.

“The goal was to hold off labor as long as possible,” Marilyn said.

At 23 weeks gestation, the baby’s heart rate started to drop, and Marilyn was moved to labor and delivery where she was monitored 24 hours a day. Two days later, the care team decided it would be safest to deliver the baby.

The NICU team from OSF Children’s Hospital – connected to OSF Saint Francis – was in the operating room waiting to care for Joseph upon delivery.

“Joe and my parents walked with Dr. Javed (a neonatologist) as they wheeled Joseph to the NICU,” Marilyn said. “Dr. Javed explained exactly what was happening and what to expect.” 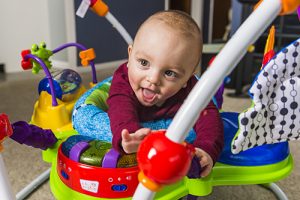 Because Joseph was less than 30 weeks gestation, he was admitted to the SBU.

The SBU simulates a womb-like environment by keeping the lights down low, safe guarding sleep, noise levels to a minimum, covering the incubator with a blanket and incorporating two-person care.

With two-person care, one person completes the needed care while the other person provides comfort and support for the baby.

“One of the first things that I felt comfortable doing was holding the top of his head and his legs still while a nurse would provide the necessary care,” Marilyn said.

Marilyn said the care team immediately involved her and Joe in Joseph’s care, including taking his temperature, changing his diapers and encouraging kangaroo care, which is holding a baby skin-to-skin. Involving the parents from the beginning helps them understand their child’s health complexities and gives them confidence to care for their baby when they go home.

Though Joseph endured a few health-related concerns in the SBU, he only required an apnea monitor and caffeine to help with his breathing when he was released from the hospital.

Today, Joseph is a “happy and calm” 14-month-old little boy, and developmentally on track according to his age.

“I think the care he received in the SBU was wonderful, from the nurses, the respiratory therapists, neonatologists and the rest of the staff,” Marilyn said. “The SBU was such a caring environment. You can tell the staff are invested in those babies and families.”