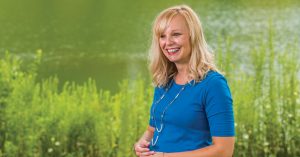 For Christa Van Unnik, of Galesburg, the fall of 2009 was an exciting time. Her husband had returned from his deployment to Iraq, and they had moved back from North Carolina where he had been stationed. On top of that, they found out they were pregnant with their first child.

But their elation was tempered when Christa had to visit the emergency room.

“Two days after finding out I was pregnant, I went to the ER with severe pain,” Christa said. “The next four to five weeks were pretty rough. I was sick all of the time and very weak.”

A turn for the worse

On the night of November 18, after feeling the best she had felt during her pregnancy, she started to experience extreme pain.

“I spent the evening in the bathroom thinking I was constipated. I also had severe pain in my right shoulder, but I didn’t attribute any of this to my pregnancy,” Christa said. “On the morning of November 19, my husband woke me up to go to my doctor’s appointment. He had to pull me out of the bed because I could not get out on my own.”

Christa made it to the end of her bed before sitting back down.

“I remember sitting on the bed and then I woke up, my husband was on top of me about to perform CPR and my sister was on the phone with 911,” Christa said. “I had passed out and started shaking like I was having a seizure.”

When first responders arrived, they had a difficult time finding Christa’s pulse and placed her on oxygen. The ambulance took Christa to OSF HealthCare St. Mary Medical Center Emergency Department in Galesburg.

“I remember the ER doctor asking me questions and performing the various checks. I remember being wheeled to the ultrasound department to check on the baby, and that’s when they discovered my left fallopian tube had burst and I was bleeding internally,” Christa said. “I was immediately rushed to surgery.”

‘My surgeon did everything to save my life’

Christa was in a crisis situation. Surgical Services at OSF HealthCare St. Mary put all other blood transfusions and surgeries on hold and rushed her into surgery.

“I remember seeing the OB doctor running down the hallway,” Christa said. “I appreciate her hustle, and I am so thankful she did everything she could to save my life.”

Christa had to have five units of blood transfused because of all of my blood loss, and went into shock on the operating table.

“I have spoken with the surgical nurse that was with me that day, and she has told me that they were so afraid they were going to lose me due to all of the blood loss and the coding. The nurses were squeezing the bags of blood as hard and as fast as they could to get the blood into me quicker,” Christa said. “I am ever so grateful for all of the staff that were there that day that saved my life.”

“Before I went to the hospital, my husband and I thought I was just constipated. After we made it through a deployment to Iraq, and then to think that this was possibly the last time I was going to see him,” Christa said. “The look on his face when he found out I had to have surgery, and then to see him after waking up was a blessing.

“After my surgery I was very afraid that I wouldn’t be able to have kids. Thankfully, I was blessed with two beautiful girls that mean the absolute world to me. I thank God for them every day.”