At her first birthday, Olivia Howard is reaching all her baby milestones—smiling, sitting up, and babbling at her big brother. Parents Shameika and Cordney marvel at the progress of their little girl, who underwent three major surgeries before she was seven months old.

Olivia made an early debut at 31 weeks gestation at OSF HealthCare Saint Francis Medical Center on August 6, 2017. She was immediately moved to the Neonatal Intensive Care Unit (NICU) at OSF HealthCare Children’s Hospital of Illinois.

Within hours, after realizing that Olivia was unable to keep food down, doctors found that she had been born with multiple developmental abnormalities in her digestive system. “It took us completely by surprise, because nothing had showed up on the prenatal ultrasound exams,” Shameika said. 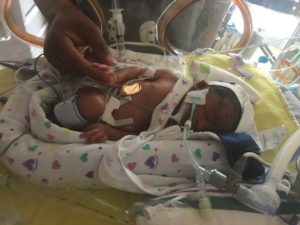 Fortunately, Olivia had a team of specialists on her side, including physicians and nurses trained to care for children with serious medical issues. Pediatric surgeons Charles Aprahamian, MD, and Anthony Munaco, MD, took the lead on her care.

“Complex cases like Olivia’s require multiple levels of expertise,” Dr. Aprahamian said. “We’re always consulting each other, and sometimes we even operate together to ensure the best outcome.”

Olivia’s most critical issue was duodenal atresia, a type of bowel obstruction that occurs when the part of the small intestine attached to the stomach (the duodenum) has not developed properly, preventing the stomach contents from moving through the digestive tract.

During a two-hour procedure, Drs. Aprahamian and Munaco removed the blocked portion of Olivia’s intestine and reconnected the healthy sections, ensuring that the two-day old, 4-pound infant could start to eat.

Over the next few weeks, Shameika and Cordney anxiously watched over Olivia in the NICU. Shameika felt that Olivia was struggling with issues beyond her surgical healing. “Her skin color didn’t look right, and she was having trouble eating,” she said.

Tests revealed that Olivia had developed jaundice resulting from biliary atresia, which occurs when the bile ducts that carry bile from the liver to the intestine have not formed correctly.

Once again, Drs. Aprahamian and Munaco joined forces in the operating room to remove the blocked bile ducts and reroute Olivia’s digestive system.

After her second surgery, Olivia slowly healed, and by mid-October, she was ready to go home. In January, however, she was back for yet another surgery, performed by pediatric surgeon Paul Jeziorczak, MD, to correct an intestinal blockage caused by scar tissue resulting from her previous procedures. 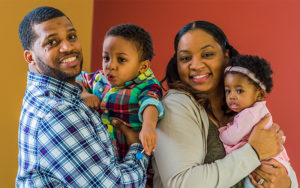 “After her last surgery, Olivia started eating better and her energy level came up,” Shameika said. “Finally, we began to see her steadily improve.”

Today, Olivia visits her surgeons for periodic checkups and continues to delight her parents and the team who brought her this far.

“I’m so grateful to the entire team at OSF Children’s Hospital—everyone was so easy to talk to, empathetic and always available,” Shameika said. “Olivia is a completely different baby today, thanks to them.”