Marilyn Cooper has a history of heart problems. The 84-year-old former nurse’s aid had a stent installed a few years back following a heart attack, and she’s been on and off blood thinners. A condition called atrial fibrillation (or AFib) makes Marilyn’s case more complicated, but thanks to a new procedure called Watchman she has new peace of mind.

Blood thinners are often prescribed, but there are some AFib patients who do not tolerate the medication. That’s where the relatively new Watchman procedure comes in.

Watchman is the name of a device implanted in the patient. Delivered by catheter, the device is placed in the left atrial appendage. That’s where 90 percent of blood clots attributable to AFib form. It is helpful in decreasing, but not eliminating, the risk of stroke.

“So [Watchman] is a way to, essentially, cork, if you will … that left atrial appendage through a procedure that goes in through the vein as opposed to open heart surgery,” says Dr. Edward Telfer, a cardiac electro physiologist at OSF HealthCare Cardiovascular Institute.

“The track record for this is excellent across the country,” says Dr. Asad Shaikh, interventional cardiologist at OSF Cardiovascular Institute. “The numbers, if you look – there’s a significant amount of data that supports using this device.”

Dr. Telfer says while there is no such thing as a safe anti-coagulant, Watchman is specifically aimed at those AFib patients who have difficulty with blood thinning medications. The benefit of the procedure is that patients can eliminate such medications in a little as 45 days following surgery. 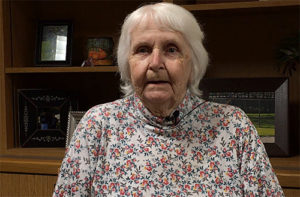 That was how Marilyn became a candidate for the procedure. She had her Watchman procedure at OSF HealthCare Saint Anthony Medical Center earlier this year and was allowed to go home the next day. She would recommend it for patients with AFib, if only for the peace of mind.

“It’s kind of a safety thing,” says Marilyn. “And I feel more comfortable now that, they said, there was less chance of me having a stroke. And I feel relieved.”

Only 10 percent of those over age 70 will develop AFib, and of those, an even smaller percentage will qualify for the Watchman procedure. Still, doctors recommend being screened.

“It’s always better to have more information than not,” says Dr. Shaikh. “So, it never hurts to ask and to get that information. Ask whoever is taking care of you whether it’s an option for you or not.”