A cloud hung over John Stout’s head for years. He had a heart condition that increased his risk for a stroke or heart attack, and he was worried about it.

John, 74, of Peoria Heights, could feel his heart skip a beat “every now and then.” He was diagnosed with atrial fibrillation – commonly shortened to AFib – an abnormal heart rhythm that affects millions of people in the United States.

The danger of AFib is that it can cause blood to pool in a small sac in the left chamber of the heart, where it is at danger of forming a clot that can get loose and block vital blood vessels, causing a stroke.

The traditional treatment for AFib is a prescription for blood thinners, which prevent blood from clotting. For several years, that is how John dealt with his AFib.

“I was put on blood thinners, and I took them for a long time,” John said. “I wanted to get off them. I was contacted by my doctor who said I was a candidate for this procedure. It sounded like a plan to me.”

The doctor who reached out was John’s cardiologist, Timir Baman, MD, from OSF HealthCare Cardiovascular Institute. The procedure is called a WATCHMAN® procedure. 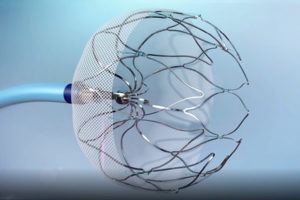 The doctor inserts a catheter into the artery through a small incision made in the leg near the groin. The catheter snakes its way to the heart, pokes a hole in the upper left chamber and inserts an umbrella-type seal that blocks blood from getting into the small sac where it tends to clot.

Typically, Dr. Baman said, a patient spends one night in the hospital, goes home the next day, and does not need to take blood thinners anymore.

“I think it’s a game changer,” Dr. Baman said. “There are a lot of people who can’t take blood thinners. So I think this is a very good option for people, and they need to be evaluated.”

Some people cannot tolerate blood thinners. They cannot properly regulate the thinness of their blood, or they suffer internal bleeding. And people on blood thinners have difficulty getting even minor cuts to stop bleeding. 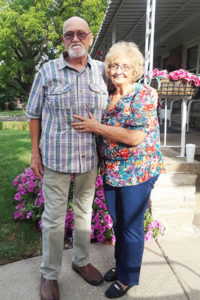 “When I was on blood thinners, if I cut myself I bled a lot,” John said. “I just felt like I’d be a lot safer if I had a WATCHMAN® put in. It didn’t take long, and I haven’t had to take blood thinners since.”

After the procedure, recovery was easy, John said. There was some soreness for a few days where the incision was made to insert the catheter, but that was it.

The procedure was worth it in John’s eyes. For him the biggest benefit of the procedure is actually psychological.

“I would do it again in a heartbeat,” he said. “It takes a lot of pressure off you, mentally, from worrying about your AFib. I still have AFib, but it’s not going to pump blood into that cavity where it can clot. It gives you a big relief.”

If you suffer from AFib and you’re having issues with your blood thinners, schedule an appointment with an OSF HealthCare Cardiovascular Institute cardiologist and ask if a WATCHMAN® is right for you.