It should have been a time of joy for Brooke Crawmer-Joseph.

It was 2013 and the Peoria woman had just received news that she was expecting her second child.

With that joyous news, however, Brooke soon found herself dealing with the news that a pap test she had prior to becoming pregnant had come back abnormal.

Brooke consulted an oncologist, but there was no indication that there was a need to be concerned, said Brooke’s mom, Carol Crawmer.

In November 2013, Brooke was put on bed rest at 25 weeks into the pregnancy. Brooke, her husband, Kevin, and their oldest son, Zephin, moved in with Brooke’s parents in north Peoria. In February 2014, the couple’s second son, Nash, was born via C-section.

“When the doctor delivered Nash, he looked around because the pregnancy had been so different than Brooke’s first pregnancy, in addition to her early labor and the abnormal pap smear, and found a growth on Brooke’s cervix,” Carol said.

“The growth was on top of the cervix, not on the bottom. That’s why it wasn’t detected,” Carol said.

A PET scan showed the cancer was everywhere. Brooke began treatment in March 2014.

By August, all cancer cells in Brooke’s neck, around her stomach and on her bladder were gone.

“The cancer where the tumor was on her cervix was inactive,” Carol said. “We celebrated that.” 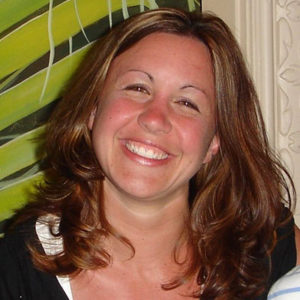 Brooke was a middle school science teacher and soccer coach in the Dunlap school district. She was the first woman inducted into the Soccer Hall of Fame in Peoria.

In December 2014, Brooke took a break from chemotherapy. She had undergone 18 rounds up to that point.

Brooke also had to quit taking a drug that was helping keep the cancer at bay due to the duration she’d been on the medication and potential complications as a result.

“The cancer just went crazy after that,” Carol said. “She lived 18 months after first being diagnosed. Brooke passed on August 15, 2015.” She was 36 years old.

Leaving behind a legacy

The outpouring of support – prayers, cards, monetary donations – during her cancer battle was overwhelming and appreciated by Brooke’s family.

“Our faith just exploded during this time,” Carol said. “Brooke never wanted attention. She wanted to use some of the money donated to her to start a foundation to help other people with cancer.

“She just really touched people and wasn’t someone who wanted a pity party. I was in awe how she managed to go about her day when she was in so much pain,” Carol said. “Brooke told me, ‘I just want people to see that cancer doesn’t have to stop you.’”

“Brooke told me, ‘After my initial shock and acceptance, I began to realize that this is not a punishment, or bad luck. I clung to God for direction and vowed to use this disease for His glory. He has shown me his grace and peace. God has shown me his presence in unimaginable ways. God is the same as he was yesterday, is today, and will be tomorrow,'” Carol said.

After Brooke died, her family and Brooke’s Battalion, a group of friends and their spouses, wanted to honor her memory and follow her wishes and started the Brooke E. Crawmer-Joseph Foundation. They floundered at first to identify a vision for the foundation. They held fundraisers, but still struggled to define the foundation’s purpose.

Then one of Brooke’s doctors suggested doing something around education since it was Brooke’s passion. The doctor also introduced the idea of educating parents about the HPV vaccination. HPV, or human papillomavirus, causes almost all cervical cancers. Getting the vaccination can reduce the risk for infection and HPV-related diseases.

The family reached out to the OSF HealthCare Foundation to begin exploring options for educating people about HPV and the vaccination.

Recent data from the Centers for Disease Prevention and Control (CDC) shows that 51% of teens have not received all the recommended doses of the HPV vaccine. Every year, cancer caused by HPV affects about 19,400 women and 12,100 men. Cervical cancer is caused by HPV. 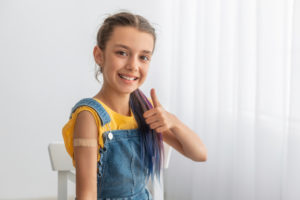 The CDC recommends two doses of the HPV vaccine for all boys and girls at ages 11-12. The vaccine can be given as early as age 9. The second dose of the vaccine should be given six to 12 months after the first dose.

Side effects from the vaccine are typically mild and include arm swelling, fever and headache.

Older teens and young adults can benefit from the vaccine, too. Men and women can get the vaccine until age 26. Individuals age 15-26 require three doses with the second dose given one to two months after the first and the third dose given six months after the first dose. There is less benefit of vaccination after age 26. However, individuals up to age 45 should discuss the option with their doctor if vaccination is of interest.

Vaccines protect your child before they are exposed to a disease. That’s why the HPV vaccine is recommended earlier rather than later, to protect your child long before they are ever exposed to the virus. Since 2006, infections with HPV types that cause most HPV cancers and genital warts have dropped by 88% among teen girls. HPV cancers and genital warts have also dropped 81% in the young adult female population.

If your child hasn’t gotten the vaccine yet, talk to their doctor about getting it as soon as possible. If you don’t have a doctor for your child, find one near you.

The Brooke E. Crawmer-Joseph Foundation will continue to hold benefits to further support the message. The annual Birdies for Brooke Golf Outing is held each September in Peoria.

“If we can use Brooke to help other people, then it’s a beautiful legacy for her and her sons,” Carol said. “Educating parents about the need to vaccinate their children – boys and girls – against HPV-related diseases is like Brooke acting as a mother, helping other mothers do something for their kids.”