“Do what the doctors tell you to do. They know best,” Brock said.

Born with a congenital heart defect, Brock has depended on the care of specially trained physicians for his entire life.

He had a condition called transposition of the great arteries. In a normal heart, the pulmonary valve carries blood from your heart to your lungs to receive oxygen, while the aorta carries that oxygen-rich blood to the rest of your body. In Brock’s heart, these arteries were transposed, or switched, meaning the blood traveling to his body didn’t carry enough oxygen.

Now 35 years old, Brock has had a pacemaker since he was 4 years old, as well as five open heart surgeries throughout his lifetime, most of the time seeing a pediatric cardiologist.

In 2012, Brock’s doctor referred him to see Dr. Marc Knepp, who had just become one of the first physicians in the country to become board certified in adult congenital heart disease.

Though he lives in East Moline, he usually sees a specialist in Peoria, rather than the clinic in Rock Island, because special equipment is used to check his pacemaker. At an appointment last year, Brock told Dr. Knepp he’s been feeling fine – no issues to report. Dr. Knepp performed his usual testing: an EKG, pacemaker check and echocardiogram – all standard tests for someone with Brock’s medical history – and found no signs of any issues.

But after consulting the latest congenital heart defect guidelines put forth by the American Heart Association/American College of Cardiology (AHA/ACC) in 2018, Dr. Knepp ordered an additional scan.

“We didn’t see anything different on any of his testing, but we saw he was due for a CT scan or an MRI,” Dr. Knepp said.

That scan revealed a startling discovery. Brock had a large aneurysm above his pulmonary valve, pressed against the underside of his sternum.

While the aneurysm produced no symptoms, it was like a ticking time bomb in Brock’s chest.

“An aneurysm like this could tear or leak and cause sudden death,” Dr. Knepp said.

Preparing for the procedure

Luckily, doctors discovered the aneurysm before any complications arose, and were able to treat it with a fairly simple procedure – a stent delivered via minimally invasive catheterization.

While the procedure itself was straightforward, his medical team needed to be careful in how they approached the aneurysm to avoid any risk of rupture. The OSF Innovation team replicated the pulmonary valve and aneurysm in a 3D modeling system – which Brock got to see through virtual reality goggles before his procedure. 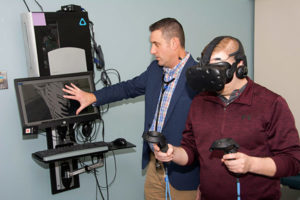 “There was a square that you could zoom in and zoom out, and take slices away,” Brock said. “Actually visualizing it made it easier to understand.”

Doctors were also able to turn the virtual model into a life-size, 3D printed model, so Dr. Priti Patel, who placed the stent, could be sure of the exact size and placement needed during the procedure.

This collaboration between specialists is part of what makes the Congenital Heart Center at OSF HealthCare Children’s Hospital of Illinois unique. And now that more people born with heart defects are surviving to adulthood, having three cardiologists board certified in adult congenital heart makes the team uniquely qualified to consult on the care for people like Brock.

“With the additional adult congenital heart training and board certification, more pediatric cardiologists are comfortable transitioning their patients to the ACHD cardiology team,” Dr. Knepp said.

“Additionally, working with local cardiologists and primary care doctors, we are able to provide high-quality, evidence-based care to patients like Brock. We don’t replace their existing doctors – we add another level of expertise.”