Some people are lucky enough to live a life without the need to go to the doctor often. Ron Cooling, of Lowpoint, Illinois, is one of them. He never had any major health issues or surgeries in the first 75 years of his life.

That is until he started experiencing shortness of breath, fatigue and dizziness – a sign of a health issue that would soon emerge. 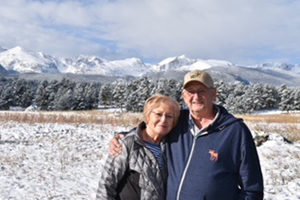 In April 2018, Ron, his wife, Donna, and their son’s family were at their cabin in Canton, Illinois. Ron was going up a flight of steps, needing to stop to catch his breath frequently.

When Melinda Cooling, Ron’s daughter-in-law and vice president of advanced practice providers at OSF HealthCare, noticed this, she asked Ron about it.

“He said he had been experiencing these symptoms for a few months,” Melinda said. “I knew we needed to get him checked out right away.”

Melinda made an appointment with Ron’s primary care team at OSF HealthCare Medical Group – Washington where they performed an EKG on Ron’s heart. An echocardiogram and stress test were also ordered at OSF HealthCare Cardiovascular Institute in Peoria.

“Walking in to the building to get those tests, I was very nervous and not exactly happy to be there,” Ron said.

The echocardiogram was completed. However, parts of the stress test couldn’t be because of what was found.

Melinda and Donna were asked to come back to join Ron to find out the results with Dr. Tinoy Kizhakekuttu, a cardiologist at OSF Cardiovascular Institute.

“Dr. Kizhakekuttu introduced himself to each one of us, shaking our hands and smiling,” Melinda said.

Dr. Kizhakekuttu explained Ron had a 2:1 block, which is when the electricity in the heart isn’t moving the way it’s supposed to. Instead of Ron’s heart rate going up during physical activity, it was dropping, causing his fatigue, dizziness and shortness of breath.

To determine Ron’s course of treatment, Dr. Kizhakekuttu called his partner Dr. David Charles, an electrophysiologist. They determined Ron would likely need a pacemaker. Dr. Charles wanted to meet with Ron that same day to make sure all of the Coolings’ questions were answered.

“The ‘wow’ moment for me was that Dr. Kizhakekuttu had already called Dr. Charles and Ron’s primary care doctor to discuss Ron’s status all before Donna and I saw Ron after his tests,” Melinda said. “Then to be able to meet with Dr. Charles that same day was also very convenient.”

A change of heart 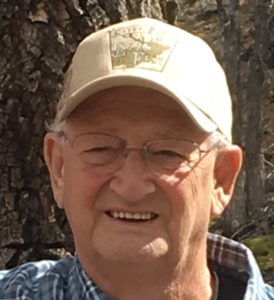 An hour after speaking to Dr. Kizhakekuttu, the Coolings were talking to Dr. Charles.

“He pulled up a heart illustration to explain what was happening to Ron’s heart that was easy for Ron and Donna to understand as well as the risks and benefits of a pacemaker,” Melinda said. “Ron became a little emotional and admitted he was scared. Dr. Charles empathetically told him that he would take excellent care of him.”

After their discussion with Dr. Charles, the Coolings decided a pacemaker to prevent Ron’s heart rate from dropping would be the best option.

Melinda said they left the OSF Cardiovascular Institute with all their questions answered and the peace of mind knowing they were doing the right thing.

On June 7, Ron underwent his first major surgery to get the pacemaker implanted, performed by Dr. Charles.

“I feel 100 percent better after surgery,” Ron said. “I would go back for whatever I needed heart-wise. There is no hesitation anymore after what I experienced.”

Melinda said it is a privilege to work and serve in health care and couldn’t be more proud to be a part of the OSF HealthCare family.

“The communication, collaboration, compassion and quick access to care was unbelievable,” Melinda said. “I’m so proud of our Mission Partners who provided this excellent experience and what we can provide all of our patients every day.”