We all cough occasionally during the course of a day. It’s not usually a sign of illness – just a tickle in the throat caused by something we ate, drank or any number of things. You generally cough once or twice, and it’s over. And within a minute or so, you’ve totally forgotten about it.

But what about a cough that won’t go away? If it lasts for several days, there’s a good chance you have bronchitis, which is inflammation of the breathing airways known as bronchi. The most common types of this disease are acute and chronic. 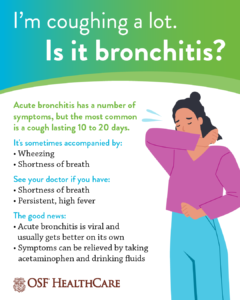 While a number of symptoms can be signs of acute bronchitis, the most common is a cough (first dry but later with a lot of mucus) lasting 10 to 20 days. It’s sometimes accompanied by wheezing and shortness of breath.

“If you have shortness of breath, that’s when you should see your doctor to have your oxygen levels checked,” said Jared Meeker, DO, a pulmonologist at OSF HealthCare. “You should also see your doctor if the cough is accompanied by a persistently high fever so more serious illnesses can be ruled out.

“However, the good news is that acute bronchitis isn’t usually something to worry about. It’s typically caused by a virus and goes away on its own in four to eight weeks. To alleviate symptoms, a person should drink plenty of fluids with electrolytes and take acetaminophen.”

Acute bronchitis typically occurs during cold weather months since that’s when viruses are more common. It’s rare for the illness to progress into anything more serious.

Is there a way to avoid acute bronchitis?

“Getting vaccinated against illnesses likely to trigger acute bronchitis – things like the flu, pneumonia and even COVID-19 – is a really good idea,” Dr. Meeker said. “A person’s chances of getting bronchitis also decrease if they avoid smoking.”

Chronic bronchitis is one of many lung diseases classified as a form of chronic obstructive pulmonary disease (COPD). Like its name suggests, it’s an ongoing, chronic illness, and once you get it, you’ll have to deal with it to some degree for the rest of your life. It’s usually diagnosed after having a productive cough lasting at least three months of the year for two consecutive years.

Unlike its acute counterpart, chronic bronchitis isn’t viral. So what causes it?

“There’s a multitude of potential factors, some of which are potentially genetic, but the strongest modifiable risk factor is cigarette smoking,” Dr. Meeker said. “Lesser factors include occupational exposures, such as livestock and agricultural farming, different types of mining and concrete manufacturing. But again, the strongest risk factor is smoking.”

When is it time to see a doctor?

“Any chronic, productive cough warrants evaluation by a doctor, especially if there’s shortness of breath,” Dr. Meeker said. “That’s because lung function needs to be evaluated to make sure there’s no obstructive disease. If there is obstruction, the patient may benefit not only from treating the cough but from using inhalers to help open their airways. This type of chronic bronchitis can be very severe and is referred to as chronic obstructive bronchitis, which is another type of COPD.”

Like acute bronchitis, there is no cure for chronic bronchitis. The only treatment is to manage the symptoms, which tend to flare up more in the cold weather months. The disease’s impact can also be reduced by getting the flu, pneumonia and COVID-19 vaccines.

But the best advice Dr. Meeker can give?

“Don’t smoke,” he said. “If there was no smoking, it wouldn’t prevent all cases of chronic bronchitis, but it would prevent a lot of them.”