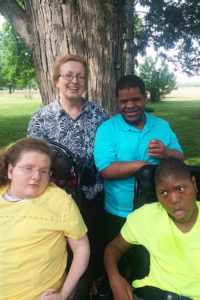 Nora Peters and her family: Phillip standing behind Lindsey, left, and Jamaria.

Our story begins with Nora Peters, a woman who raised three children and then pursued a childhood dream.

“Ever since I was a girl, I wanted to take care of children who aren’t loved,” Nora said.

She started by filling in for foster parents who needed respite. Then in the early 2000s, Phillip came to live with her.

Phillip was 11 years old, mentally delayed in his development and non-verbal. When Phillip’s grandmother passed away, Nora adopted him. He’s 29 now.

A couple of years later came Lindsey, an infant given up by her birth parents. She wasn’t expected to live for five months. Nora adopted her, too. Today, Lindsey is 16, non-verbal and confined to a wheelchair. She occasionally depends on a portable oxygen unit to assist her breathing.

Then there’s Jamaria, whom Nora adopted at the age of 3. Like Lindsey, he’s 16 – “They think they’re twins,” Nora said. Jamaria is also non-verbal, suffers seizures, must be fed through a tube and spends his days in a wheelchair.

Nora’s philosophy is simple: “A child should always be loved.”

So she loves them with every ounce of her being, pouring all she has into their care. There is nothing she would not do for them. They are her children, after all.

A gift of joy

Well, it came to pass during the Christmas season of 2015 that Jamaria’s seizures had become so violent his hip was damaged and required surgery. So Nora drove him 45 miles from their home in Lincoln, Illinois, to OSF HealthCare Children’s Hospital of Illinois in Peoria. No one was available to stay with Phillip and Lindsey at home, so she brought them, too.

As their first night at the hospital approached, though, Nora grew anxious. Jamaria had never spent the night alone or even with a stranger. It would be OK for Nora to stay in the room with him overnight, but not for his siblings. Nora didn’t know what to do. So she prayed.

“Christmas is a celebration of the birth of our Savior,” Nora said. “That night, the gift of joy entered my son’s room. She came in the form of a nurse.”

And the nurse’s name was Joy.

“If there is a need I can meet and God puts me there to meet it, I shouldn’t be looking around to see who else can meet that need,” said Joy Geer, RN, a nurse at OSF Children’s Hospital.

Joy’s little brother had been born with a congenital heart defect. Their family spent a lot of time in hospitals, and as she grew up, Joy followed her own heart into pediatric nursing. She joined OSF Children’s Hospital in 2008, when she and her husband, Garry, moved to Peoria. One more thing about the Geers: They were also foster parents.

So it shouldn’t be a surprise that they connected immediately, these two women who had invested their lives in serving the needs of children they had not born. Joy felt Nora’s burden and listened. When Nora asked questions, Joy answered every one. 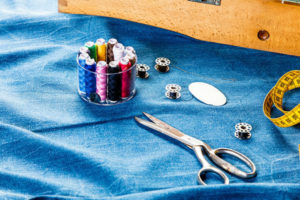 Confident that Jamaria would be in good hands, Nora took her other children and found an empty waiting room. There, she put Phillip to sleep on the couch, then managed Lindsey’s oxygen while the girl slept in her wheelchair.

They were awake and back in Jamaria’s room by 6 a.m. Joy gave them a full report; the scope and details convincing Nora that this nurse really cared.

“I can’t imagine having to leave and not know every detail,” Joy said. “Every parent deserves to know their child wasn’t a chore or just a set of tasks you did, but that you took care of them as a person.”

The next time Nora saw Joy was a couple of days later, when Jamaria was being checked out of the hospital. This time, Joy brought a present.

Jamaria’s hip cast included a rod between his legs, so he could not be dressed in regular pants. Nora had openly worried about that, too. So on her day off, Joy had purchased a pair of trousers, cut the seams and then reconstructed them with Velcro so they could be taken on and off with relative ease. She gave the new pants to Jamaria.

Nora was so overwhelmed with emotion, she could barely manage to choke a “thank you” through her tears. Joy smiled. And then she was gone.

Where did she go? 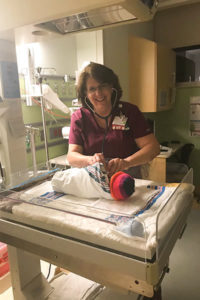 But Nora wanted to express her thanks more appropriately and nominate Joy for a DAISY Award, an honor presented to “extraordinary nurses.” So she called the hospital and asked for Joy.

She called again. And again. Every time the response was the same:

“There’s nobody here by that name.”

Nora began to wonder if she had imagined everything. But those special, hand-fashioned pants were no illusion. They had come from somebody. A year passed, then two.

“I truly began to believe Joy must have been an angel,” Nora said. “A real one from God.”

Then last fall, Jamaria was back at OSF Children’s Hospital for more surgery. Nora was waiting with him in his room – and in walked Joy.

Nora burst into tears and reached out to touch her.

When Nora told Joy that she had decided the nurse was an angel, Joy didn’t know exactly what to say. Reflecting on it today, she calls it an honor.

“To be thought of as somebody who blessed you and then disappeared, that’s good,” Joy said. “None of the nurses are here to win awards. We all do things that are just humans taking care of humans. It’s what God wants us to do.”

The angel’s name was Joy

So how was it that Nora had been unable to find any trace of Joy?

Well, you can look at it this way. Joy is an in-house float, meaning her day-to-day assignments at the 136-bed hospital are spread over half a dozen units and four floors. For security reasons, nurses’ badges display only their first names, so Nora had nothing but “Joy” to help her search.

Or you can also look at it as Nora does: Joy is an angel.

“That night last year, I did not wander the hallways as in times past,” Nora said. “I was able to care for my other children at home, an hour away, because our Joy – Joy Geer – was caring for my precious son.”