Kaleb Reedy is always on the move. He loves fishing, camping, swimming and adventuring in the woods.

The 14-year-old Mattoon, Illinois, boy is described by his parents as funny, caring, curious and kind. But even on good days, Kaleb struggles with anxiety and sensory sensitivities. Unfortunately, his mom explains, Kaleb has dealt with a lot of bad days in the last 1½ years. 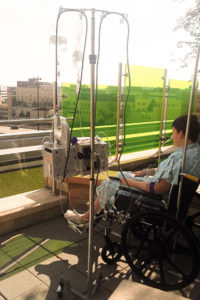 On November 14, 2017, Kaleb was taken to the emergency room of the local hospital with intense stomach and leg pain. He was transferred to a larger medical center in a nearby city where it was determined Kaleb was septic with an E.coli infection throughout his body. During emergency surgery to clean out the infection, doctors found a hole in Kaleb’s intestine.

A second surgery a week later was needed to clean out any remaining infection. During two weeks in the intensive care unit, Kaleb ran a very high fever and had a high heart rate due to the infection.

Unable to walk, fluid built up in Kaleb’s body. Due to a build-up of about 17 pounds of fluid, Kaleb required high-flow oxygen to help his lungs work. Throughout this time, the teen was in constant, intense pain and fighting fevers. 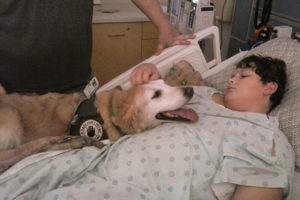 After two weeks with little improvement, it was decided Kaleb needed surgery and care at a hospital specializing in caring for kids. He was transferred to OSF HealthCare Children’s Hospital of Illinois in Peoria. Another surgery, more antibiotics and additional blood transfusions ensued.

“As we got to know Dr. Paul and the rest of the team, Kaleb just became more comfortable,” his mom, Lyndsey, said. “Kaleb felt like Dr. Paul was trying to understand him and was on his side. He responded best to Dr. Paul.

“Because of Kaleb being in crisis mode most of the time. Dr. Paul’s no-panic presence was very helpful,” Lyndsey said. “And as more time went by they each got to know each other better.”

When Kaleb was able to go home, Lyndsey said it still wasn’t easy. 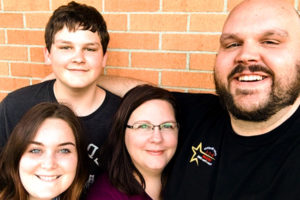 Kaleb with his family

“He couldn’t eat or drink anything and continued to receive nourishment only through the PICC line,” she said. “A nurse and physical therapist visited once a week to treat and monitor Kaleb’s progress, but the majority of his care was provided by my husband, Brian, and myself. This included changing bandages and drains, administering medication and keeping him clean to prevent infection.”

The weeks at home out of the hospital were very difficult for Kaleb and his family as it was around the holidays. Kaleb spent Thanksgiving in the hospital and was released just days before Christmas.

“He had trouble with sleeping, severe anxiety, flashbacks and was in constant pain. Bathing and dressing changes caused him to have panic attacks. He developed a urinary tract infection, and endured recurring fevers and vomiting, which resulted in several trips to the ER and another blood transfusion,” Lyndsey said. “In January, he was taken back to OSF Children’s Hospital with a gall bladder attack. Kaleb was in severe pain. Due to the nature of his illness, he couldn’t be treated with strong pain relievers.”

While at home, Kaleb had wonderful visitors and his sister, Kaylee, and his service dog, Dory, were by his side. His parents worked tirelessly through their own exhaustion and anxiety to care for and help him. Despite everyone’s best hopes and efforts, Kaleb’s intestine did not heal and further intervention was needed.

Back to the hospital

Kaleb returned to OSF Children’s’ Hospital in mid-January 2018, undergoing ileostomy surgery to remove a section of intestine, colon and valve and to fix several hernias. While the operation was successful, the pain Kaleb experienced was intense and he had side effects from the pain medication.

“He really struggled to recover from that surgery,” Lyndsey said. “His sensitive sensory systems were being constantly assaulted and he was in severe pain. He battled fevers, fluid in the lungs and anxiety as he worked to return home.”

In August 2018, Kaleb underwent another surgery with Dr. Jeziorczak to reverse the ileostomy.

“That was his last surgery and so far, things are going good,” Lyndsey said. “Kaleb has overcome a lot, and he’s back to enjoying his physical activities and his passions. It’s been difficult for him to overcome the additional anxiety his illness caused. He is the strongest teen I know, mentally and physically.”

Thankful for the care at OSF Children’s Hospital

But the care Kaleb and his entire family were shown by Dr. Jeziorczak and everyone at OSF Children’s Hospital “helped us through all of this,” Lyndsey said.

“Kaleb’s very serious needs and condition required a team – infectious disease, surgery and the pharmacy, which mixed his nutrition,”

Lyndsey said. “As parents, we remained in shock most of the time. At OSF Children’s Hospital, Kaleb could have therapy dogs visit – he missed his dog so much – and we could wash his favorite blanket from home onsite, which was a great comfort for him. They encouraged family to be with Kaleb, and he was so thankful to be able to go out on the rooftop garden to get fresh air and sun.

“They really allowed him the freedom to be a kid. One night we had bought him glow sticks and a glow in the dark ball and we had a little party. He loves the snow and we brought a little inside for him to throw a snowball at his dad. We always tried to do things that would cheer him up and the staff was always for this,” Lyndsey recalls. “One nurse remembered he liked our Christmas tree at home and was sad he was stuck in the hospital. She came into work a few days later with a tree and ornaments that were just for him.

“We are so thankful for the care he received from Dr. Paul (Jeziorczak) and the entire team,” she said.