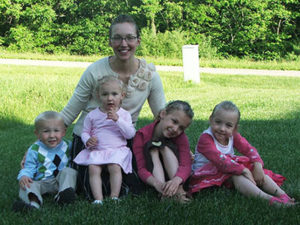 The author and her four children in 2009, the year of her MS diagnosis.

I remember the summer of 2009 was a beautiful one in Illinois, and I spent it enjoying chasing around my four kiddos. They were 1, 2 and a half, 4 and almost 6.

Busy was the name of my game, and so a tingly, slightly numb left hand wasn’t something that could slow me down. I’ve been carrying at least one sweet baby around for the last six years, and I just assumed I had a pinched nerve in my shoulder that was giving me trouble.

After several months of this symptom, I made an appointment with my family doctor.

At the time our health insurance was an HMO, which requires a referral to go to a specialist. I was convinced I just need to see a chiropractor and get an adjustment, and my left side will be good as new.

Thank goodness my family doctor was very conservative and didn’t totally agree with my plan. He sent me to a neurologist instead.

At the time I thought it was overkill and a major annoyance to have more appointments to fuss with.

The neurologist did a physical exam and then sent me for a MRI.

On October 23, 2009, I went to the doctor to learn the results of the MRI. My husband offered to go, but I was optimistic. I encouraged him to not jam up his schedule for this silly appointment.

When she said I had multiple sclerosis all I could think of was a wheelchair.

I’ve often thought we should be thankful for all the things we don’t know about because, we’ve been saved from having deal with them. I never suspected I could have MS, and I knew almost nothing about the disease.

My unawareness made this day so scary.

Would we have to sell the three-story house we’d built and move to an accessible ranch? How on earth would I keep up with my sweet children?

For six weeks after my diagnosis, I mourned the future I had once pictured. Now my future included a chronic illness that would affect my family in who knows how big a way. 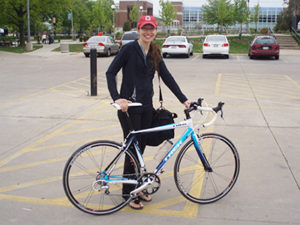 Leann chooses to use exercise as a means to fight back against MS.

After realizing that a pity party is the least fun party to host, I decided to focus on fitness and fight back against this auto-immune disease that I was learning about. Fitness was something I could control, and I decided if I can run today, it’s more likely I’d be able to run tomorrow.

I signed up for my first triathlon and pushed back against my disease. It’s been almost 10 years, and my theory on activity hasn’t changed. In fact, it’s served me well. As I’ve learned so much more about MS, I realized there are as many stories as there are patients, and I could have some say in writing mine.

Education, connecting with other patients, cheering for others with MS and advocating for myself has made a big difference in how I cope with MS. Though my kids can outrun me now, we are all signed up to do a 5k together.

I haven’t sold my house. I love the advice another patient gave me that first month – think about the worst case scenario, make a plan for how to deal with it, and then move on and don’t dwell on that version of your future. I’ve shared that a zillion times.

Have a plan. Be a warrior, not a worrier.