At the age of 7, Pete McNear has spent more than his share of time inside of a hospital.

Pete was born with tricuspid atresia/hypoplastic right heart syndrome, a complex congenital heart defect most easily described as having half a heart. A patient at the Congenital Heart Center at OSF HealthCare Children’s Hospital of Illinois, Pete has undergone three heart surgeries and two cardiac catheter procedures – all before the age of 3½.

Danielle McNear was 16 weeks pregnant when she was sent to a specialist after a prenatal ultrasound detected a heart defect in the baby.

“They didn’t know what the defect may have been at that point,” Danielle said.

At 19 weeks, Danielle saw specialists at the Congenital Heart Center where they determined the baby had tricuspid atresia (TA)/hypoplastic right heart syndrome (HRHS).

The diagnosis means the right ventricle of the baby’s heart is either too small or absent, restricting blood flow to the body and with it a lack of oxygen. Tricuspid atresia (TA) is the most common heart problem present in babies with HRHS, however TA in and of itself is not so common. Only 1 in 10,000 babies born have TA, which is when the tricuspid valve, located between the atrium and the ventricle of the right side of the heart, doesn’t develop properly, restricting blood from flowing normally.

“They said as long as I was able to carry him, he’d be OK, but we wouldn’t know much else until he was born,” Danielle said.

With a room full of doctors and nurses, Pete was born at OSF HealthCare Saint Francis Medical Center on January 31, 2011, and was whisked away to the neonatal intensive care unit (NICU) at OSF Children’s Hospital.

In the NICU, Pete was monitored for seven days before undergoing a balloon procedure to allow for better blood flow to the rest of the body.

At 8 days old, Pete went home with Danielle and his dad, Joe, to their Lacon home. 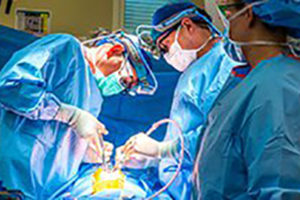 “The right side of his heart has no function,” Danielle said. “He’s your half a heart kid.”

Having TA/HRHS requires at least three surgeries from infancy up to around age 4 to improve blood flow to the body.

Pete – or PBJ (Peter Bryan James) as he’s known at the Congenital Heart Center – had his first surgery at 6 weeks old. This surgery consisted of inserting a shunt – or an artificial tube – to provide blood flow to the lungs.

“It’s all about getting oxygen-rich blood to the lungs and the rest of the body,” Danielle said. “He did well following that surgery.”

A second surgery at 6 months old created a direct connection between the pulmonary artery and the vessel that returns oxygen-poor blood from the upper part of the body to the heart. It reduces the amount of blood flow from returning to the small right side of the heart and directs it to the lungs.

Eight days in the hospital and Pete was back at home.

“He was still blue in color – which is typical of a congenital heart kid with his defect at that point,” Danielle said.

Despite his condition, Pete thrived and the family went on with their normal lives – which now meant regular doctor visits, lab work and monitoring.

When he was 3½, Pete had the third in the series of surgeries to improve the blood flow in his body. The procedure creates a connection that allows blood coming back from the lower body to go to the lungs. This means oxygen-rich and oxygen-poor blood no longer mix in the heart.

Following the surgery and 10-day hospital stay, Joe remarked, “he actually had color – he wasn’t blue.”

“After surgery was the first time we saw him pink,” she said. “A few days after we were home, Pete noticed his hands weren’t purple, and he said, ‘The doctors did that to me.’” 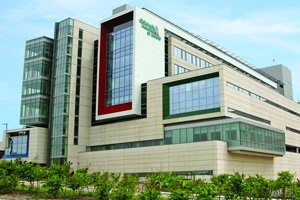 Receiving care at the Congenital Heart Center is similar to being embraced by family, the McNears said.

“When we’re here for surgeries, it’s nice because we can stay here,” Danielle said. “The nurses and physicians become your friends and family – you are giving them your child’s life.”

Since Pete’s diagnosis, Danielle and Joe have become involved with The Organization for Understanding Congenital Hearts (TOUCH). The group provides emotional support for the entire family and brings together parents of kids with congenital heart defects who have common concerns, feelings and anxieties.

“We are there to help parents and bridge the gap,” Danielle said.

Today, Pete has no restrictions. He has regular checkups with his cardiologist, Dr. Priti Patel, at the Congenital Heart Center.

“He’s doing well,” Danielle said. “One of the things with heart defects, our kids look very normal, yet there’s something very serious going on inside.”

Pete plays baseball – he likes hitting and playing catcher and the outfield. He tried soccer, but it was a bit too much, Danielle said.

“Although his heart is ‘mended’ he will require lifelong care and monitoring,” Danielle said. “Having a congenital heart defect brings many challenges and Pete amazes me each and every day.”

In the future, Pete may require a pacemaker or possibly a heart transplant when he’s an adult.

“You just don’t know,” Danielle said. “There’s nothing at the end of the day to give him a whole heart. We are glad he is doing as well as he is.”