There’s not much Rodger Bycroft remembers about November 15, 2017.

His wife, Kathy, and others have to tell the story.

“He called me from home and said he was having indigestion and back pain. I told him he needed to go to the ER or call 911,” Kathy said.

As he pulled into the parking lot, his truck struck several vehicles and continued moving.

Kathy was on her way from work in the Quad Cities and was not far behind Rodger. She watched as he struck four more vehicles. “I think that’s what actually stopped him from going any further,” she said. 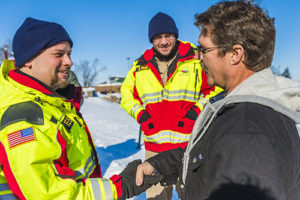 People from the hospital and nearby clinic had started to gather in the parking lot.

“I told Craig I was going over to see what was going on,” Bear said. “I got about 30-40 yards away and I could see he was blue, really blue and didn’t look good at all.”

Craig and Bear pulled Rodger from the truck and started CPR. Someone from the clinic came out with an Automated External Defibrillator (AED) and the Life Flight nurses administered a shock. Rodger struggled to breathe on his own.

“The timing of his accident was incredible – we were there, then there was the person who brought out the AED and there was an ambulance on the way,” Bear said. “He couldn’t have been any luckier with the timing of that heart attack and being in the right place at the right time with the right resources just showing up.”

Bear and Craig started Rodger on IV medication, intubated him and rushed him into the ER at OSF St. Mary. It was quickly determined he needed to go to OSF HealthCare Saint Francis Medical Center in Peoria. The crew flew Rodger to Peoria where he underwent a procedure placing two stents to open up the blockage that had caused the heart attack.

Today, Rodger is feeling healthier and is in cardio therapy.

“I didn’t think I’d bring him home,” Kathy said. “We’re just still in shock and thankful for how fast they all worked that day.”

Bear said people act like “we did something amazing. In all honesty, we just happened to be at the right place at the right time to do what we’re trained to do.”