Jarrett Polk was only 2 years old when his parents Matt and Barbara Polk felt something was wrong.

The signs were there, though subtle at the time.

“We were at his oldest sister’s soccer game and Jarrett kept asking for drinks and going to the bathroom throughout the game. Nothing was super obvious, but I just had a mother’s intuition,” Barbara said.

Some of this is familiar territory for the active family of seven. Matt, Jarrett’s father, has battled Type 1 diabetes since childhood. In fact, it was their heightened awareness that led to the early detection and diagnosis of Jarrett’s own condition.

“We got out my glucometer when we got home and tested him,” Matt recalled.  “The glucometer said too high to read. So we wiped his hands off, hoping he had sugar on them and tested again.”

The Polks waited, praying anxiously; their hearts sinking when the same “too high to read” message appeared on Matt’s glucometer for a second time.

What followed would be the beginning of a journey to understand and manage Jarrett’s condition.

A trip to the emergency room, two days in the hospital, followed by a confirmed diagnosis of Type 1 diabetes for Jarrett led the Polk family to the Pediatric Diabetes Resource Center at OSF HealthCare Children’s Hospital of Illinois.

It was there they began to work with the registered nurses as well as a dietitian, social worker and pediatric endocrinologist to develop a diabetes self-management plan for Jarrett. 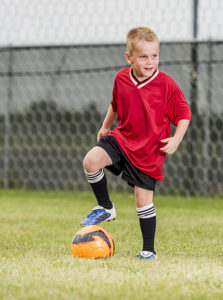 The family, which includes Jarrett’s older siblings Connor, Hailey and Makenna, worked with the PDRC to learn more about diabetes. Matt and Barbara made it a point to educate their other children. Leaning on the staff and team of specialists they learned more than they ever could imagine.

“When we talked to the pediatric diabetes resource center we wanted to know how can we make this the new norm; so the other kids don’t feel like their whole world is turned upside down.”

Today, Matt and Barbara are proud to say Jarrett’s siblings are his guardian angels and have become a huge safety net and support system for him.

“They can tell if he’s not acting or feeling well and they know how to give him carbs when he needs them. They really watch out for him and Jarrett is very lucky to have them,” Matt said.

Jarrett, now 6, also is now on an insulin pump, which drastically reduces the number of sticks for him and delivers predictable rapid-acting insulin.

“The pump is amazing and we are using a continuous glucose monitor to help us regulate blood sugars as much as possible,” Barbara said.

Jarrett has learned to understand when he doesn’t feel right and can communicate that to his parents.

Since his diagnosis, the Polks had another boy, Landon, who is 3. His older siblings, Connor, 16, Hailey, 15 and Makenna, 12, are still his biggest supporters and typically are on the sidelines watching as Jarrett plays soccer and flag football.

In a twist for the family, at age 12 Hailey was also diagnosed with Type 1 diabetes about a year after Jarrett’s diagnosis.

Thanks to the help of the Pediatric Diabetic Resource Center, and continued advances in diabetic research, the Polk family is managing both Jarrett’s and Hailey’s diabetes and living life to the fullest.