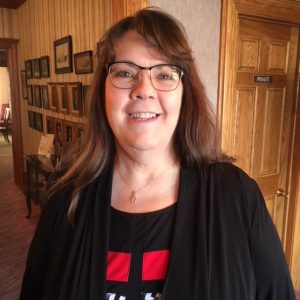 Thirty years. That’s how long Christine Bathe was unaware that she had a heart condition.

In 1992, Christine Bathe, 30 at the time, was working as an Intensive Care Unit nurse at OSF HealthCare St. Joseph Medical Center in Bloomington, Illinois.

“I started having severe pain in my upper back,” Christine said. “But I thought I was too young to be having heart-related issues.”

Christine’s primary care physician suggested she get an echocardiogram (EKG) done on her heart. It came back abnormal.

Christine was admitted to OSF St. Joseph and was diagnosed with myocardial bridging – a condition where a coronary artery is buried within the heart instead of sitting on top of it.

Thinking her condition could be controlled by medication and regular checkups with Dr. James McCriskin, her cardiologist, she would soon find out her heart journey was only just beginning.

It was late one evening in 1993. Christine was working a night shift at OSF St. Joseph. She was standing at the nurses’ station reviewing patients’ charts when she felt her heart rate go up.

“The last thing I remember was telling the two nurses next to me that I didn’t feel well,” Christine said.

Christine was gray and didn’t have a pulse. A Code Blue was called – a code to alert a specific care team that someone is in cardiac arrest. Fortunately, Christine opened her eyes after receiving oxygen and CPR.

Christine was admitted to OSF St. Joseph, where she underwent further testing. It was determined her myocardial bridging was the source of her heart stopping. Her medication was adjusted from the result of that heart episode.

A heart attack a half a world from home

In 1995, Christine had the opportunity to go to Vladimir, Russia, with Dr. Stephen Matter, Dr. McCriskin and a few other nurses from OSF St. Joseph and another local hospital to teach cardiac medicine.

On day two of the trip, the group was touring a hospital when Christine started to feel ill. She alerted Deb Berry, a nurse she had traveled with, and Christine fell to the floor.

“When I opened my eyes, Dr. McCriskin was giving me rescue breaths, and Deb was straddled over me giving me chest compressions,” Christine said.

Christine was admitted to the ICU in a Russian hospital for two days, and was released to be cared for by Dr. McCriskin and the health team that Christine came with. She stayed for the remainder of the two-week trip, but wasn’t able to teach her courses due to her heart attack.

“My left descending coronary artery was buried inside my heart. When my heart contracted, it completely occluded the blood flow in that artery,” Christine said. “So, they cut a v-shape in my heart muscle and pulled my artery out of my heart and placed it back on top of my heart.”

In addition to her open heart surgery, Christine also had a pacemaker put in. When Christine’s heart rate dropped to 65, it would stop. The pacemaker was set to 70, so her heart rate would never dip below that.

A heart full of love 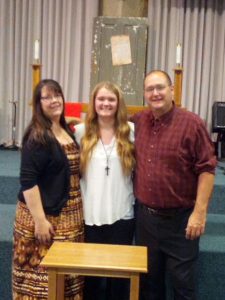 About a year and half after her open heart surgery, Christine married the love of her life, Mike. A little over a year after they were married, the couple was expecting a baby girl.

At five months pregnant, Christine didn’t feel her daughter move as much as usual. Christine was put on bed rest and had weekly non-stress tests.

“All the extra fluid when I was pregnant was taxing on my heart,” Christine said.

On April 6, 1999, three weeks before her due date, Christine’s blood pressure was too high and she was immediately induced. Christine delivered a healthy baby girl, Courtney.

Soon after the birth of Courtney, Christine starting having more upper back pain. She developed scar tissue from her first surgery, which pushed the artery back into her heart. In June 2000, she had to have a second open heart surgery to repair it.

After the surgery, Christine didn’t experience any issues with her heart for the next decade.

But on Easter Sunday 2010, she felt an abnormal heart rhythm, was dizzy and felt like she may pass out. The following day, Christine followed up with Dr. Patrick Murphy – the cardiologist she began seeing when her insurance changed.

“He was able to look at my pacemaker history and found that I had episodes of ventricular tachycardia [a condition where the lower chambers of the heart beat quickly], which can be life threatening,” Christine said.

As a precaution, Christine had a defibrillator put in, which internally shocks the person if it senses an abnormal heart rhythm.

“Luckily, I haven’t been shocked to this day,” Christine said.

In 2015, Christine had a cardiac catheterization for recurrent chest pain. The results showed noticeable changes in her heart.

In addition to her myocardial bridging, Christine was diagnosed with apical hypertrophic cardiomyopathy – which isn’t common.

Apical hypertrophic cardiomyopathy is a condition where the heart muscle is thickened, leaving less space for blood to fill the heart. When the heart contracts, it’s unable to push all the volume of the blood within the heart out because of its thickness. Symptoms can be shortness of breath, chest pain with activity and fatigue.

“My heart doesn’t fill with the accurate amount of blood needed because the space inside the heart muscle is too narrow,” Christine said.

To treat her new diagnosis, Christine’s medication was altered and her pacemaker was reprogrammed.

Christine’s condition – apical hypertrophic cardiomyopathy – is genetic, but she hasn’t been able to find a single family member who has her same condition.

“I was born with the heart condition but we didn’t know it back then,” Christine said. “I passed out quite a bit as a child, but didn’t give my heart a thought.”

Christine’s advice to others going through a difficult heart-related journey “is to keep praying and keep trusting God.”

“The way I look at everything I’ve gone through is it was in God’s plan,” Christine said. “One of the reasons I believe was when I was still working in the ICU. I had the opportunity to share my story with my patients – especially younger patients – and let them know there is a good outcome at the end of their journey.”

Today, Christine is living a healthy life with her family, working as a patient placement nurse at OSF Saint Joseph.

“I encourage anyone to get checked out by their doctor – even with the smallest of symptoms,” Christine said. “It could save your life.”