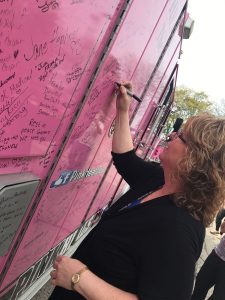 Sometimes when it rains it pours. Ida Lassandro understands this perhaps better than anyone. It was 2015 when she, still reeling from the sudden death of her husband David in 2014, received her diagnosis of breast cancer.

“It was difficult,” she says. “I was still grieving my husband and now I had cancer. There were lots of struggles along the way, but I had to keep on going.”

The next couple of years were equally rough on Ida. With radiation treatments and multiple surgeries, it was not only a physically draining time, but an emotionally draining one.

Thankfully, Ida had the love and support of her family to help her endure and keep on fighting Plus, as a patient accounts supervisor who’s been with OSF HealthCare Saint Anthony Medical Center for 36 years, she had a strong crew of co-workers to lean on for strength. A visit from Pink Heals volunteers didn’t hurt either.

“My co-workers have been amazing,” she says, “And I can’t say enough good things about our cancer center here at OSF. They’re like a family to me.”

Thanks to the great work of her care team at the Patricia D. Pepe Center for Cancer Care at OSF Saint Anthony, Ida has pulled through and is now cancer-free.

It’s been a harrowing few years, but she’s looking forward to a healthy future and has some simple advice for other women – advice she hopes resonates during Breast Cancer Awareness Month in October.

“Get your mammograms regularly, and report any changes to your physician as soon as you notice them. Early detection is crucial. It can save your life.”

Mammograms are the single most effective tool in the early detection of breast cancer and are proven to save lives. When detected early, doctors can begin treatment before symptoms begin, resulting in a better outcome. Learn more at our breast health page.

According to the American Cancer Society, death rates from breast cancer have been declining since 1989, which is believed to be due to a combination of increased awareness resulting in more women getting screened regularly, advancements in screening technology and advancements in treatment. However, there’s room for improvement. More than 40,000 women in the United States are still expected to die from breast cancer in 2017.