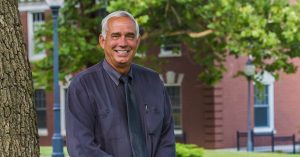 When it came time to have an abscess removed that was discovered during a routine colonoscopy, Tom Prince knew Dr. Jerry Mitchell at OSF HealthCare Holy Family Medical Center in Monmouth was the surgeon to visit.

“Having met Dr. Mitchell before, and knowing I could have the surgery in Monmouth, I had no issue having it done there. I have always received great care at OSF Holy Family,” said Tom, a professor in the business department at Monmouth College. “Everything went smoothly. I felt the staff – the surgical staff in pre-op and post-op – was outstanding,”

‘I didn’t think twice about where to have surgery’

Beyond the surgical care he received, Tom also has the utmost respect for OSF HealthCare Holy Family due to the care his mother received in the last two weeks of her life.

Tom and his wife cared for his mother, Dolores, for the last three years of her life. Diagnosed with cancer when Tom was a child, Dolores battled the disease on three re-occurrences until three years ago when she passed away.

“(OSF Holy Family) was amazing whenever I had to take her in for treatment. The last weeks, she was in hospice on the acute care floor at the hospital. They gave her care I couldn’t have received for her anywhere else,” Tom said. “I feel a very strong loyalty to the hospital and staff out there. I would go out of my way to go there.

“The care she received at OSF Holy Family was extraordinary,” Tom said.

Having lived in Monmouth for almost 20 years and raised two daughters, Tom has watched as the hospital has evolved over the years.

“I have a great deal of respect for the rural health center we have here,” he said. “The community is very fortunate to have it.”