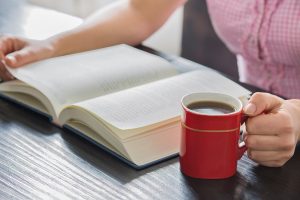 A quick internet search reveals a lot of articles and studies that contradict each other about the effects of coffee on memory and brain function. Some studies link coffee drinking with better memory and some say there’s no impact at all.

While those studies are good for generating headlines that draw people’s attention, they don’t show anything more than a loose correlation between coffee and memory, according to Theresa Regan, Ph.D., a neuropsychologist for OSF HealthCare. They don’t prove that drinking coffee actually causes either better memory or memory loss, or that it prevents you from developing a cognitive disorder, like dementia, later in life.

Basically, drinking coffee probably isn’t that one simple trick to prevent dementia that you’re looking for.

“If coffee does impact cognition, it seems like there’s a small enough impact that it’s hard to consistently capture,” Dr. Regan said. “Engaging in a healthy lifestyle is more likely to help your brain than coffee alone.

“I think the bottom line is there’s just this small inconsistent effect, and in the end, it’s probably not going to make a meaningful difference to someone as they age, like helping them live independently rather than needing assistance.”

A healthy body is the first step

The first priority if you want to maintain a healthy brain is maintaining a healthy body.

“It’s important to keep in mind that because the brain is part of the body, it benefits from a healthy lifestyle,” Dr. Regan said. “The brain is an organ that is fed by blood vessels, so anything that impacts the health of blood vessels, like diabetes, high blood pressure and high cholesterol, makes it harder to maintain a healthy brain.”

“So if you do grab a coffee, perhaps you could take it along while you take a hike through the woods, put veggies in your grocery cart, stay involved with people in your community, and learn a new and interesting skill. These are the things that over time are much more likely to be connected with a healthy body and brain than coffee drinking alone.”

Once you’ve done everything to support the physical health of your brain, you want to make sure nothing is draining the brain’s ability to work at its highest level, like a lack of sleep, untreated depression or too much stress.

While Dr. Regan is skeptical about any meaningful relationship between coffee and memory, she has more confidence in the evidence that leading a healthy lifestyle, staying socially active and learning new skills helps keeps the brain healthy over time.

As for coffee, it may not be the great brain savior you’ve been hoping for, but that doesn’t mean it doesn’t have its worthwhile charms.