That’s one reason why medical advances are such big deals. These breakthroughs help extend the time we have to spend with loved ones, doing things we enjoy.

One such technological advance in the fight against cancer is the NanoKnife System®, which arrived at OSF HealthCare Saint Francis Medical Center in Peoria, Illinois, this winter.

Pancreatic cancer is difficult to diagnose in its early stages when it’s more treatable. By Stage 3, while it has not spread to other organs, it is often too advanced to be able to remove surgically. Average life expectancy after diagnosis of Stage 3 pancreatic cancer is about nine to 15 months, in part depending on what treatment options are feasible.

The NanoKnife is changing that.

“From my perspective, what we are trying to do is give people options. Patients want it straight from providers: ‘Lay out my options and let’s decide what direction to go.’ This is another option we can show and give them another chance to live longer – and maybe the chance to live a lot longer.”

Thermal ablation – a menu of procedures that treat cancer by using probes to apply extreme heat or cold – is a technique that can be used for tumors that cannot be surgically removed. It kills not only cancerous cells but also healthy cells in adjacent structures. Some organs can tolerate this collateral damage, but others, such as the duodenum and the common bile duct, which are around the pancreas, cannot. The same type of damage to healthy cells occurs with radiation. 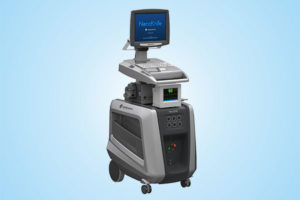 “In regard to thermal ablative therapies, the pancreas is an organ that doesn’t like to be messed with,” said Robert King, MD, director of Non-Invasive Vascular Imaging for Central Illinois Radiological Associates in Peoria.

The pancreas is located behind the stomach and tucked under the liver. It’s about six inches long, and its head is connected to the small intestine.

“Because the pancreas is high real estate and there are other major structures and vessels in the area, you can’t cut the cancer out in surgery unless you’ve diagnosed it relatively early,” said Sonia Orcutt, MD, medical director of Surgical Oncology for Peoria Surgical Group.

Dr. King and Dr. Orcutt are two of three physicians at OSF Saint Francis trained to use the NanoKnife System. The third is Chandler Wilfong, MD, of OSF Medical Group – Surgery.

The NanoKnife probes are placed around the tumor with image guidance. The probes then deliver a series of high voltage pulses to cancerous cells. But rather than burning or freezing, like the thermal ablation probes, the NanoKnife pulses punch holes through the cell membranes.

“That disrupts the equilibrium of the cell with its surrounding area, and the body says that cell needs to be destroyed because its membrane has been damaged,” Tom said. “The body in essence is ridding the tumor on its own, recognizing there has been damage to all of the cancerous cells.”

The key is being able to target the diseased cells and minimize the peripheral damage.

“We can place the probes next to an artery or vein and ablate cancer tissue while leaving the arteries and veins intact,” Dr. King said. “That gives us a huge advantage.”

Nine to 15 months; basically a year, give or take. That might not sound like much, but think about all the living that can be packed into that amount of time. One more holiday. One more round of family birthdays. A graduation. A wedding. The birth of a child or grandchild.

“And that average of two years is going to grow,” Tom said.

The NanoKnife System isn’t just for pancreatic cancer, either.

The potential of the NanoKnife is great, according to Dr. Orcutt.

“It’s great,” she said, “to be on the front lines of something like this.”