I had always been healthy. My main health concern was to keep an eye on my cholesterol. I didn’t think much of it when, in my mid-forties, I noticed a small tremor in my finger.

I brought it up to my doctor, who likewise didn’t seem overly concerned when I described my symptoms, but sent me to see a movement disorder specialist (MDS) for an evaluation.

The MDS at OSF HealthCare Illinois Neurological Institute had me go through the battery of seemingly simple tests: tapping your index finger to your thumb, opening and closing your hands, tapping your feet, holding out your hands with your eyes closed and counting backwards, walking down the hall.

Then, she looked at my wife and I and said, “You have Parkinson’s disease.”

When she said those words, you could have knocked me over with a feather. I was NOT prepared. WE were not prepared.

In the months that followed my diagnosis, I constantly worried about what this was going to mean for my wife and kids. Would their lives now be turned upside down by having to take care of me? This was not fair to them. I could accept that I was going to suffer, but it wasn’t fair that they had to as well.

I felt hopeless and all alone.

I kept reading that depression was a common issue, and my movement disorder specialist referred me to a mental health therapist. Over several months, my counselor helped me realize that Parkinson’s disease did not define me.

We did a lot of exercises to help me learn to cope. The most powerful exercise for me was to write a letter to Parkinson’s. It was hard, but it helped me clarify what was going on emotionally. It was such a powerful exercise for me that I asked my wife to do the same thing. It was somehow easier for us to write our feelings about Parkinson’s down on paper than to talk directly to each other. By writing that letter, I found a whole new set of priorities. I wanted to live my life to the fullest.

The biggest priority I found was the power of exercise. Parkinson’s likes to take control of one’s body and confidence. While the disease progression cannot be stopped, I am convinced there are tangible things that can be done to help slow its ability to take over your life. Exercise is clearly the biggest of those things you can do.

I found Rock Steady Boxing through a personal trainer I was working with in Chicago. After my first class there, I knew this needed to be in my home community of Peoria, Illinois, so others could benefit. We are now four years into the program here, and I have never been more fulfilled than I am being part of the team making it possible to fight back against Parkinson’s disease.

Focusing on helping others as a coach keeps me positive about my own progression of the disease. Helping others cope taught me not to fear my own progression. The more people I talked to, the more it became obvious that everyone was different. Just because I saw someone else struggle with initiating movement – a common symptom for people with Parkinson’s – didn’t mean I necessarily will have the same issue.

And there’s no benefit in worrying about what may or may not happen. Focusing on the worst-case scenario just means you live it twice if it eventually happens. I just focus on keeping positive, taking my meds properly and exercising.

Coaching others and getting involved in the PD community has really helped me stay positive. I wish I could put into words the absolute joy and sense of accomplishment that comes with coaching. I get a front row seat to the boxer’s joy when they accomplish a physical task such as jumping rope, one they viewed as almost impossible. Their newly empowered spirit is contagious for the whole class. 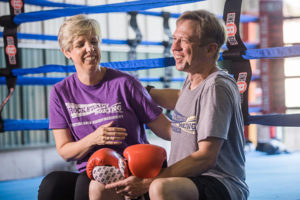 I continue to be amazed by how much helping others has helped me keep a strong, positive mental attitude and how much I feel that attitude helps me keep Parkinson’s at bay.

Michael J. Fox talks about quitting his day job to find his life’s work. I believe there is tremendous wisdom in that statement, and I strongly believe I have found my life’s work.

I no longer worry about my future. While I am not happy I have Parkinson’s disease, it is OK that I do. I focus on today and what I can do to make life better for myself and others around me.

Looking back, I don’t want anyone else to feel how I felt in those first few months following my diagnosis. I know I can’t take all the pain away, but I am compelled to help other people living with Parkinson’s understand they are not alone. We’re in this together.