Do you know your stroke risk?

At just 38 years old, Amber Thomas had never considered the possibility that she might have a stroke.

So when she started feeling dizzy after a visit to the chiropractor, she didn’t suspect that a stroke could be causing her symptoms.

Amber’s husband, John, remembers the events leading up to the day in January 2017, that changed their lives forever. Amber went to the chiropractor, as she had been for over a year. The next day, feeling off, she went to see her primary care doctor, who thought fluid on the inner ear was causing her symptoms and sent her home.

On the way home from her appointment, Amber told John her vision was a little blurry. She took the day off work and went to their home in Morton, Illinois, to rest.

“All of it was odd to us. We had no reason to think that it was anything stroke related. No one that we were close to has ever had to deal with a stroke, so we didn’t connect any dots,” John said. 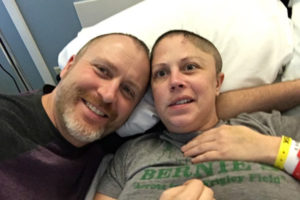 John and Amber Thomas at OSF HealthCare Saint Francis Medical Center. Amber was in the hospital for 75 days after a devastating stroke. She had several surgeries, including a craniectomy, a procedure where part of the skull is temporarily removed to relieve pressure from brain swelling.

John was downstairs with the couple’s young son, Finley, when he heard a crash upstairs where Amber had been lying in bed.

“I could see that one side of her face was drooping. I said, ‘Honey, what happened?’ and she didn’t respond. I grabbed her hand and said, ‘If you can understand me, squeeze my hand.’ And she wouldn’t squeeze my hand,” John said.

When she arrived in the Emergency Department at OSF HealthCare Saint Francis Medical Center in Peoria, doctors immediately recognized Amber’s symptoms as signs of stroke and administered tPA, a drug used to dissolve blood clots.

A scan revealed a tear in the lining of Amber’s left carotid artery, one of the two main blood vessels that carry blood and oxygen to the brain. She also had two large clots blocking blood flow to the left side of her brain.

Neurosurgeons were able to remove one of the two clots and place a stent in her artery, but the damage suffered when her brain was deprived of blood and oxygen could not be reversed.

When doctors explained that Amber had suffered a severe stroke, John was shocked. He’d noticed her face was drooping at home, and that she had seemed unable to use her right hand, but it didn’t make sense to him.

“My first thought was, ‘This looks like a stroke, but she’s too young for a stroke. Maybe it’s some kind of a severe drug interaction.’ You don’t connect the dots to that being something that you’re at risk for,” he said. 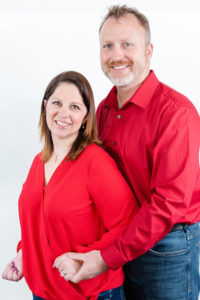 John and Amber Thomas in 2019, two years after Amber had a major stroke. She was just 38 years old at the time of her stroke.

During a stroke, your brain’s blood supply is interrupted. Deprived of oxygen, brain cells can die off quickly, and once they’re gone, they’re gone forever. Despite suffering widespread damage to the left hemisphere of her brain, Amber continues to improve two years after the devastating stroke.

“Even with a severe stroke and a severe loss of brain material, there is the ability for that other hemisphere to pick up the slack, and she is living proof of that,” John said.

Much of what she’s lost since her stroke, though, will never be recovered, including many of her memories. In the two years since her stroke, Amber and her family have made a point to educate others about the risks of stroke and chiropractic care.

“We try to talk about it a lot, because she doesn’t remember it. And we try to share the story with as many people as will listen because we want people to know there is a potential risk there and that they should be asking questions. It’s not just reserved for people of a certain age,” John said.

“We people to understand that they should ask questions and get educated, and make a choice about the risks.”