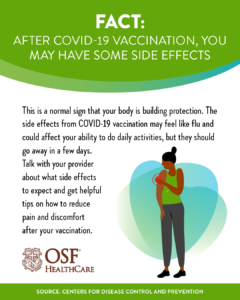 Some of the potential side effects of a vaccine – fever, chills, headache and fatigue – can seem very similar to the symptoms of the illness it’s meant to prevent.

But if you understand how vaccines work, you’ll know that experiencing a side effect isn’t a sign that something’s gone wrong. It’s a sign that your body is responding just the way it should after a vaccine.

“Any time your immune system encounters a foreign material – or something your body doesn’t recognize – it mounts an immune response to attack that foreign body and get rid of that foreign material,” said Julie Giddens, PharmD, an OSF HealthCare pharmacist who specializes in treating infectious diseases.

That immune response causes your body to create proteins that attack the foreign material, and they can also cause symptoms such as fever, fatigue or a headache.

“Not everyone will have a large immune response, so they may not experience a noticeable fever or fatigue. But those who do, it can be because their immune system is working,” Julie said. 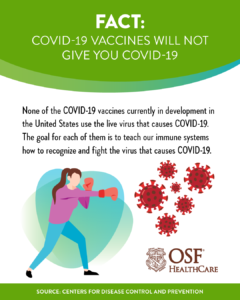 Your body’s immune system isn’t necessarily assessing whether something new in your bloodstream is good or bad. It’s only able to distinguish between things that are familiar and things that are foreign – and attack the latter.

Whether it’s targeting a virus or a virus-like particle introduced by a vaccine, your immune system responds in essentially the same way: Eliminate what doesn’t belong.

The difference is a vaccine doesn’t usually pose a risk of making you sick from the virus or bacteria you are being vaccinated against.

“Most vaccines are not a live virus,” Julie said.

Even those vaccines that do contain a live virus use an attenuated (or weakened) version of the virus.

These don’t pose a threat to people with a healthy immune system. However, they are not recommended for those with weakened immune systems.

More often, vaccines contain a subunit (a part of the virus or bacteria) or an inactive (dead) version of the virus.

A new type of vaccine

A relatively new type of vaccine may contain part of a germ’s genetic code called mRNA, which causes your body to produce proteins that resemble a part of the germ itself. Even though these proteins are produced in your body, your immune system will still attack and destroy them.

Because your body will recognize those proteins if you’re ever exposed to the virus or bacteria, your immune system can more quickly and efficiently respond and eliminate it.

This mRNA technology is one of the vaccine types developed against COVID-19.

The Centers for Disease Control and Prevention (CDC) does not recommend taking medications such as acetaminophen (Tylenol), ibuprofen (Advil) or antihistamines (Benadryl) prior to receiving the vaccine. Taking these medications can mask any existing symptoms you may experience in addition to any allergic reaction you may have following the vaccine.

If you have pain or discomfort where you got the shot:

Get your COVID-19 vaccine

To reduce discomfort from fever:

Call a doctor if: