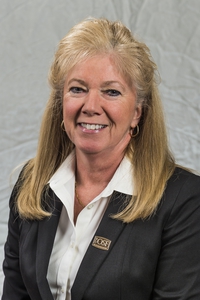 When it comes to hospital administration, Patty Luker can take a back seat to no one. After earning her master's degree in the field, she held top posts at hospitals in Ohio, Louisiana and Illinois.

But when it comes to riding the roads on their shiny red Harley, Patty is happy to let her husband, Bob, take over driving. "He tours me," she says with a laugh. "We just like to get out for an hour or two and have fun."

Patty and Bob have been a team for close to three decades and after she became a hospital administrator, he followed her to each new position. "He is a great guy," she says. "But it was also a great way to see the country." Bob now works as a human resources manager for Lowe's.

Patty joined the OSF family in July 2009. "I loved the environment here. Even though I'm not at the bedside, I have the ability to make sure patients have a great experience."

"Even though I had never worked for a Catholic organization before, coming here just felt right to me. It was all about the Mission and Values of the Sisters, and the way employees and patients are treated."

The Luker family includes three grown children. Jennifer lives in Connecticut with her husband, and is the Executive Assistant to an East Coast Electrical Contractor. Jonathon is in the Army, and stationed at Joint Base Lewis/McCord in Washington.  Julianne is living in Florida, attending college, majoring in Speech and Language Therapy.  Patty has recently welcomed a new grandson, James Robert.

Besides riding motorcycles, Patty is also an avid reader, mostly non-fiction. Her latest? "Have a Little Faith," by Mitch Albom, which focuses on the "divine spark within us all" - something Patty knows well! 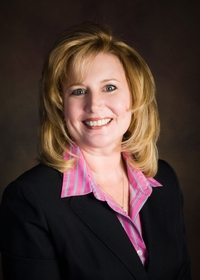 Terri Springer Theresa Springer grew up in LeClaire, Iowa, just outside the Quad Cities and attended high school in Mississippi after her family transferred there. She received her bachelor's degree from St. Ambrose University in Davenport. She loves living in a small town like Monmouth because, as she will tell you, "This has been a great community to raise my son in."

If you ask Theresa why she enjoys the culture at OSF Holy Family, she says, "It is great to work for an organization with such a strong Mission and Vision where the focus is truly caring for our patients 'with the greatest care and love.'"

Theresa has been married to her husband, Perry, for over 15 years. She has one son, Colby. She is an active member of the Monmouth Kiwanis Club. In her free time, she enjoys golf, photography, and any sort of adventure/thrill-based activity; skydiving, whitewater rafting, zip lining, roller coasters... you name it, she'll try it! She's also an avid University of Iowa football fan, often traveling to bowl games and using her season tickets every chance she can. 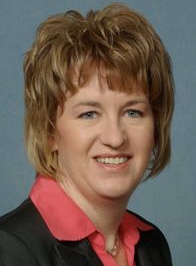 Dana Adcock Dana Adcock was born at the former Monmouth Hospital, now OSF Holy Family and grew up in the Monmouth community. She has worked at OSF for over 13 years, starting off at OSF Sain Francis Medical Center in Peoria, transferring to OSF St. Mary in 2001, and finally landing back in her hometown in February of 2011. "I am very proud and glad to be back in my hometown," she says.

Dana is married to David and they have two daughters; Victoria and Olivia. Dana's hobbies include reading and traveling with her family. She is also an active member of the American College of Healthcare Executives (ACHE), the Central Illinois Chapter of ACHE Education Committee, and the Healthcare Financial Management Association (HFMA) - McMahon/Illini Chapter. 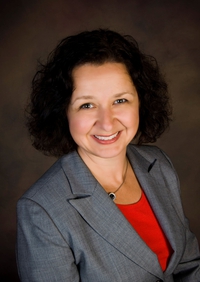 Shelley Wiborg Shelley Wiborg grew up in Woodhull, Illinois and, as she puts it, "loves the dynamics of a small town." She earned her bachelor's degree in nursing from Northeast Missouri State University in Kirksville, Missouri and her master's degree in health administration from St. Francis University in Joliet. During her years in the clinical field, she specialized in cardiac and emergency nursing care.

If you asked Shelley what she loved about working for OSF Holy Family, she would tell you, "Family is the key word. Already I have felt welcomed by everyone I have encountered here. I also felt drawn to a Christian organization whose stated Mission is to 'serve with the greatest care and love.' Excellence in patient care is imperative and I see that here at OSF Holy Family."

Along with her husband of more than 20 years, John, she has three children and lives in Milan. In her spare time, she tries to find time to golf, but also enjoys reading and trying out new recipes in the kitchen. She also stays fit and active by swimming, playing volleyball and gardening. 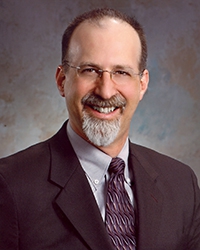 “Every day is different.  Every patient is different.  We see it all,” says Dr. Lasala.  Working in both the Emergency Department as well as our Rural Health Clinic, he gets to practice the hands-on ‘down-home’ medicine he loves.

Now as Chief of Staff, he’ll play an even larger role, helping others care for patients.  “I try to be a good teacher,” he says.  As he takes on more administrative duties and will be facilitating staff meetings, you’ll still find him taking care of patients.

Though early on he considered becoming an attorney, Dr. Lasala started “gravitating toward science” as a young teen.  He earned his MD at Rush medical College in Chicago; internships and residency were completed at the University of Illinois College of Medicine at Peoria.  He is board certified in both Family Medicine and Geriatric Medicine.

An active member of the community, Dr Lasala often represents the hospital at civic events   At Monmouth College, along with Luke Raymond, LCPC,  and Jean Garner, RN, he helped educate students on alcohol abuse; for the Rotary, the subject matter was stroke.

Dr. Lasala is married to the Reverend Dr. Kathy Stoner-Lasala, pastor of Faith United Presbyterian Church in Monmouth.  They have one son, Jacob, studying for his PhD in Marine Biology at Florida Atlantic University.

In his free time, Dr. Lasala is “a big sports fan, golfer, and lover of current events as well as history.  And…if you can recommend a good spy novel, let him know!