Everyone around you moves as they should. Everything sounds fine. You fit right in.

In reality, you’re moving slow. When you talk, people next to you strain to hear. But you don’t know.

This is the dilemma of people with Parkinson’s disease, where signals from your brain to your muscles grow progressively weaker. Your brain orders a big step or a loud, clear sentence, but your leg translates the step as a shuffle, your vocal cords respond with a whisper – and you have no idea.

There is no cure for Parkinson’s. But thanks to therapies like LSVT BIG® and LSVT LOUD®, offered by OSF Rehabilitation, symptoms can be managed.

“If we didn’t have programs like those, I don’t know what we would have done,” Gladys Schmidt said. 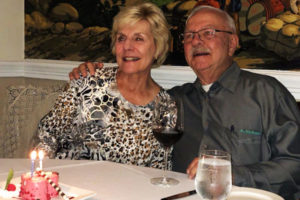 John, her husband of 52 years, has Parkinson’s. Gladys first started to notice changes in his gait and speech a few years ago, but didn’t give them too much thought because episodes were intermittent. Then their adult sons noted John’s slurred speech when talking on the phone. To John, though, everything felt normal. Almost.

“I fell once or twice, but I just thought I was getting older, or something had tripped me that I didn’t notice,” John said. “But I knew something wasn’t right.”

For a year, his doctor had been ordering tests, which John passed with flying colors. Then, while sitting in his hotel room on a business trip in October 2015, John couldn’t decipher a single word of the notes he had taken that day.

John’s doctor sent him to a neurologist for more tests. A year later, he was finally diagnosed with Parkinson’s.

“That was actually a relief, knowing what it was,” John said. “I figured I could do something about it, now that I knew what was wrong.”

Lee Silverman Voice Treatment (LSVT) BIG and LOUD are named for a woman with Parkinson’s who inspired her therapist to do research that led to the program’s founding in the 1980s. LSVT LOUD was the first evidence-based therapy that proved to make a long-term difference in the lives of Parkinson’s patients. LSVT BIG soon followed.

“The programs are designed to help the person understand that in their head, they feel like they are moving and talking normal, but what the rest of us see and hear is not normal,” said Brittany Heidemann, MS, CCC-SLP, a speech language pathologist at OSF Rehabilitation in Peoria.

When a person with Parkinson’s is referred to OSF Rehabilitation, they undergo an evaluation that includes audio-visual recordings of their words and actions.

“Usually at first, they’re in denial,” Brittany said. “But then we let them watch themselves, and they go, ‘Oh, you’re kidding me. That’s what I look like? That’s why people tell me they can’t hear me?’”

Therapists work with their patients to set personalized goals. Those goals vary, depending on the individual, and they may be as simple as being able to play on the floor with a grandchild. Other goals are more standardized, such as maintaining a speaking volume of 85-90 decibels.

The approaches to therapy are consistent.

“We push big and loud,” said Mike Holloway, PT, DPT, a physical therapist at OSF Rehabilitation. “If you exaggerate and go bigger, you will end up at normal. We just have to recalibrate what sounds and feels normal to them.” 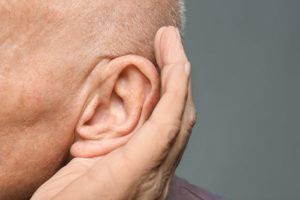 The programs are intense, each requiring four one-hour sessions a week for four weeks.

LSVT BIG starts with relatively simple activities, such as getting out of bed or walking up and down stairs. An occupational therapist will work with the patient’s hands and arms, addressing fine motor skills that are useful in getting dressed or cooking a meal. A physical therapist will work to develop and maintain leg strength, balance and walking.

An LSVT LOUD session includes a series of voice stretching exercises, each repeated 15 times, and working on everyday phrases like, “Is the mail here yet?” There are also practical application exercises, such as conversing with OSF Rehabilitation staff.

An alternative program to LSVT LOUD is SPEAK OUT!®, which starts with individual therapy and advances to The LOUD Crowd®, a weekly group session. SPEAK OUT! also includes components that address memory issues and finding the right word to use, as Parkinson’s also slows down that process.

All of the programs are accompanied by 30 days of homework for the patients to do on their own.

John Schmidt has been through all of the programs.

“I started with LOUD. It did feel like I was shouting, but I started talking better. I could tell,” John said. “The problem is that once you finish the therapy, you’re on your own to keep up with the exercises. I did not, and my voice again deteriorated.”

Brittany recommended the SPEAK OUT! Program, and John now participates in The LOUD Crowd.

“I really believe that I would not be communicating with my voice were it not for this program,” John said.

“Later, I did the LSVT BIG. I really like the exercises. I have been engaged in a program called Rock Steady Boxing, which is great. The strength that I had gained really has helped me. The BIG program helped me focus on exercises that helped my balance. I feel a lot better.”