Viruses are constantly changing. Their genetic code is prone to changes called mutations that can change how a virus looks or affects its hosts.

“Words like mutation make people think that something terribly wrong is occurring or something is dramatically different,” said Douglas Kasper, MD. Dr. Kasper is the section head of infectious disease at the University of Illinois College of Medicine Peoria and a leader in the OSF HealthCare response to COVID-19.

But often that’s not the case. Viral mutations typically have no significant immediate effect on the ability of the virus to cause disease in humans.

Dr. Kasper explains how viruses mutate into variants and strains. 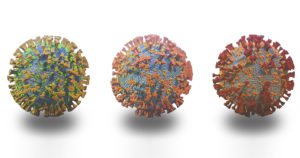 Viruses rely on a host to survive and replicate. They invade the body of a human or an animal and bind with the host’s cells to allow their own genetic material (RNA) to enter the cells. The host’s own cells read the genetic code and replicate it, making more of the virus.

That new virus then leaves the cell in search of another host to infect.

Sometimes when that genetic code is being translated into proteins, a piece of the code gets changed. This is called a mutation, and they happen frequently.

“Human cells are DNA-based. And DNA – thankfully for us – has much better integrity than RNA. DNA has the ability to check itself. If there are small changes, or what we call mutations, to its genetic code, it can fix itself and get back to normal. RNA is a lot more messy,” Dr. Kasper said.

“This perpetual cycle goes on of constant replication. Each time a replication occurs, there is a small chance that code could change. When you have this go over a huge population over time, the odds start to favor that the virus will adjust. It’s evolution on a very, very rapid level.”

So it’s not surprising that a virus like SARS-CoV-2, the virus that causes COVID-19, would mutate. That’s something scientists and vaccine developers have expected since the beginning of the current epidemic.

The question is how drastically and quickly is the virus changing.

“Most of the time when these mutations occur, they are of no consequence, because one adjustment doesn’t change the protein configuration,” Dr. Kasper said.

These small changes are called “drift,” and usually translate into changes in a protein’s structure that allow our immune systems to continue to recognize and respond to an antigen.

What’s more concerning are changes called “shift” – abrupt, major changes in the structure of a virus.

If a virus changes enough, it could respond differently to treatments or become less recognizable to the antibodies developed after natural infection or vaccination. Scientists around the world work closely to determine if the multiple variants we’ve seen emerge impact vaccine effectiveness and therapeutic treatment options.

In some cases, it’s possible that a variant could lead to worse illness or clinical outcomes. Fortunately, the available vaccines remain highly effective against protecting for serious clinical outcomes associated with COVID-19 infection, making timely vaccination (including booster) even more of a priority for communities.

There will likely continue to be variant strains that will be watched by worldwide health leaders. The key point remains ensuring that ongoing vaccination provides adequate protection from variant SARS CoV2 strains.

Vaccine developers are well aware of the ability of viruses to change over time, and they created vaccines that would account for that.

Research shows the antibodies created after vaccination will recognize and respond to many variations of the spike protein. This leads experts to be fairly confident the vaccines will continue to be effective against many mutations that may arise.

But they also prepared for how they would respond if a dramatic shift occurs.

The Pfizer and Moderna vaccines both use mRNA to teach our bodies to recognize and fight off these spike proteins.

While they have multiple ingredients, mRNA vaccines have essentially two important components:

If this structure of the spike protein changed enough that the vaccine’s effectiveness was compromised, it’s likely only that small piece of genetic code would need to be updated – which is much simpler than developing an entirely new vaccine.

“Part of the reason the mRNA structure was chosen was because of its ability to address these kinds of changes. It was always likely that there would need to be an adjustment,” Dr. Kasper said.

“There’s always been an expectation that over time, if these spike proteins do change significantly, the vaccines could be updated to address the changes and still provide the benefit to society that it’s intended to,” Dr. Kasper said.