This article was updated May 23, 2022, to reflect new information from the CDC.

One question many people who are vaccinated for COVID-19 have is whether they can transmit the virus to someone who isn’t vaccinated.

For this to happen, it would mean the vaccinated person was asymptomatic – being infected with the virus without having symptoms.

While the COVID-19 vaccines have provided an opportunity to slow the spread of the virus, scientists continue studying how much the vaccines can prevent transmission from occurring. 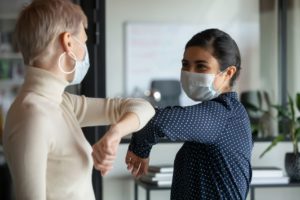 The good news is that data from the U.S. Centers for Disease Control and Prevention (CDC) shows while COVID-19 infections do occur in fully vaccinated people, these instances appear to be exceptionally rare.

“We do not have conclusive proof. But more and more studies and real-world evidence points to fully vaccinated people, who are not immunocompromised, are less likely to transmit the virus if they become infected,” said Brian Laird, PharmD, a manager in Pharmacy Operations at OSF HealthCare.

How is that possible?

“The reason why is that vaccinated people have a lower viral load if they get infected,” Brian said.

Viral load means the amount of virus an infected person produces. If the viral load is significantly smaller because someone is vaccinated, that lessens the risk of transmitting the virus to others through the transmission of respiratory droplets.

So should vaccinated people be concerned about passing the virus to a friend or family member who is not vaccinated?

“Very few things in medicine have a zero percent chance of happening. But if the person is vaccinated and not immunocompromised for any reasons, there is less of a reason to be concerned about transmitting the virus if they become infected,” Brian said.

People who are immunocompromised and are vaccinated still are at risk of severe illness or hospitalization due to COVID-19 and should continue to wear a mask and practice other precautions.

It’s important to remember how vaccines work. Many people don’t realize that vaccines primarily prevent the disease for which they were developed, but they don’t necessarily prevent infection.

“In general, vaccines work by allowing your own body to produce antibodies — to mount a defense – against the disease for which you’ve been vaccinated. Your body then remembers what to do if it encounters pathogens from that disease in the future. When that happens, the immune system shuts down the virus before any damage is done,” Brian said. “No vaccine, however, is 100% effective in preventing the intended disease. As the number of people who get vaccinated increases, however, the more everyone’s risk of infection drops.”

The U.S. Food and Drug Administration and CDC have approved COVID-19 boosters for people age 5 and older.

Guidance calls for administration of the first booster for recipients of Moderna or Pfizer five months after the primary two-dose series. A second booster is recommended four months after the first booster. For kids age 5 to 11, approval is only for one booster five months following their primary series of Pfizer, which is the only vaccine approved for that age group.

As for Johnson & Johnson, the recommendation is those 18 years or older who received the one-dose vaccine get a booster two months later and a second booster of either Pfizer or Moderna four months following the first booster.

Get the brand available

The federal agencies also have approved the “mix-and-match” approach to getting a booster. This means: