Are your vaccines up-to-date?

Vaccinations prevent diseases that can be dangerous or even deadly. They reduce the risk of infection by working with the body’s natural defenses to develop immunity safely.

Vaccinations can benefit both the people who get them and vulnerable, unvaccinated people around them. That’s because the infection has fewer people it can spread to through the community if most people are immunized.

How our bodies fight infection

There is much uncertainty, even fear, surrounding vaccinations. Most of the apprehension about vaccines comes from a lack of knowledge or understanding of how vaccinations help the body protect itself.

“Our bodies are made up of trillions of cells, each with a purpose. While still working on the total, scientists estimate the number of cells at around 30 trillion,” said Lori Grooms, director of Infection Prevention and Control at OSF HealthCare. “When a bacteria or virus invades the body, the intruder begins to multiply and attack or mimic our cells, infecting us and causing us to become ill.”

Our immune system has several ways to fight the intruders. While our blood carries oxygen to tissues and organs, it also contains white blood cells, or immune cells, that fight infection.

Antibodies to the rescue 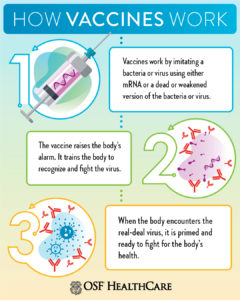 When our immune system recognizes an invader, it starts to mobilize its forces to deal with the threat. The mobilization can take several days.

“After we defeat the infection, our bodies often catalog the invader and remember how to protect us against that disease in the future,” Grooms said. “It’s a constant battle worthy of Hollywood’s biggest screen.”

Some antibodies provide immunity for a lifetime, while others do not last as long – but your body has already learned how to fight off the virus.

Vaccinations work by imitating a bacteria or virus. While vaccines traditionally use a dead or weakened version of the virus, there’s also a new type of vaccine that uses messenger RNA (mRNA). This new way of developing a vaccine was used to create COVID-19 vaccines. COVID-19 mRNA vaccines give instructions for our cells to make a harmless piece of what is called the “spike protein” of the coronavirus. The spike protein is found on the surface of the virus that causes COVID-19.

Next, the cell displays the protein piece on its surface. Our immune systems recognize that the protein doesn’t belong there and begin building an immune response and making antibodies, like what happens in natural infection against COVID-19.

As is the case in traditional vaccines, our immune system pre-catalogs the invader and is more prepared to attack it should we become infected for real. The imitation infection caused by a vaccine may cause minor symptoms, such as fever. You should expect these minor symptoms as your body builds immunity.

“Once your body makes the required antibodies, your body remembers how to fight that disease in the future,” Grooms said. “Remember, because it takes a couple of days to weeks for our bodies to build up an immunity, it’s still possible to get infected by the targeted disease just before or just after the vaccination.”

Vaccinations are a safe way to build up your body’s immunity to certain diseases, helping it prepare to fight the disease in the future.