Developing a vaccine for SARS-CoV-2, the virus that causes COVID-19, has turned into a race, and many of us are anticipating the day immunization against this infectious disease can begin.

Some may feel the creation of several potential vaccines has happened too quickly and they question whether that’s good or bad.

“The reason the studying of the potential vaccine can happen faster is because there is more opportunity to test it,” she said. “And second, the science surrounding this particular vaccine process just continues to advance. Timelines are shortening because of the evolution of science.”

On the fast track

The U.S. Food and Drug Administration (FDA) has a fast track process designed to make it easier to develop and faster to review potential drugs, such as a COVID-19 vaccine, to treat serious conditions and fill an unmet medical need.

It’s about getting important and necessary drugs to the public earlier. Fast track does not mean cutting corners or skipping over clinical trials or the study and review of results. Fast track – in the case of COVID-19 vaccines under development – is all about the intense focus being given to create a drug that is in great need worldwide.

“Once a drug receives fast track designation, early and frequent communication between the FDA and a drug company is encouraged throughout the entire development and review process,” according to the FDA. “The frequency of communication assures that questions and issues are resolved quickly, often leading to earlier drug approval and access by the public.” 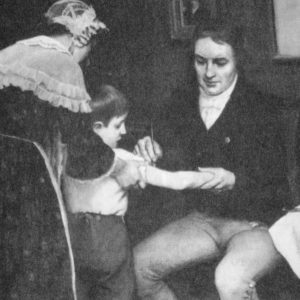 Vaccine development started more than two centuries ago when English doctor Edward Jenner treated a young boy by injecting him with pus from cowpox blisters found on a milkmaid’s hands.

Cowpox contains the vaccinia virus, which causes smallpox. The injection immunized the boy against smallpox. The name of the virus was used to coin the term “vaccine.”

While smallpox was targeted by the first vaccine developed nearly 225 years ago, it wasn’t until 1980 that the World Health Assembly, following decades of efforts by the World Health Organization (WHO), declared smallpox eradicated.

To date, smallpox is the only infectious disease to be eradicated worldwide. The disease once killed up to 35% of its victims and left others scarred or blind.

According to WHO, when a disease stops circulating in a region, it’s considered eliminated in that region. For example, polio was eliminated in the United States by 1979 after widespread vaccination efforts.

Only when a disease is eliminated worldwide is it considered eradicated.

There are 14 infectious diseases, according to the Centers for Disease Control and Prevention (CDC) that once were prevalent in the U.S. before the development of vaccines for each of them.

While the diseases still exist, they are no longer the threat they once were as vaccines have immunized the majority of people.

From there, the vaccine begins a series of three clinical trials laid out in phases. The manufacturer must successfully complete all the phases.

Once the results of the clinical trials are available and before a vaccine can be released to the public, there are a number of reviews and regulatory approvals for efficacy, safety and manufacturing.

Close monitoring continues once the vaccine is released to detect any unexpected adverse side effects and to further assess effectiveness among large numbers of people.

Production of a vaccine 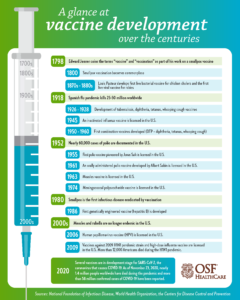 Other vaccines use genetic code rather than part of the virus itself with a technique using messenger RNA (mRNA).

The genetic recipe is made from a DNA template in the lab. The DNA can be synthesized from an electronic sequence that can be sent across the world instantly by computer. It takes about a week to generate an experimental batch of an mRNA vaccine.

The genetic recipe directs cells to make pieces of the spikes that sit atop the coronavirus. Once it’s injected, the body’s immune system makes antibodies that recognize these spikes. If a vaccinated person is later exposed to the coronavirus, those antibodies stand ready to attack the virus.

We believe in the science, efficacy and safety of vaccines. Also, we continue wearing masks, washing our hands and maintaining physical distance around others until there is widespread availability of a vaccine.

“As an overarching principle, OSF is supportive of the use of vaccines,” Salverson said. “We believe they help prevent illnesses and keep our communities healthy. We are going to evaluate the safety and efficacy of any COVID-19 vaccine just like we do with any other vaccine.”