Those four words, uttered by my husband, woke me from a sleep early on Sunday, March 29. These words were scary because in this time of COVID-19, and especially during those early days of the pandemic, a fever was one of the main symptoms to indicate you had the virus. My husband has heart disease, an underlying medical condition. I was scared. 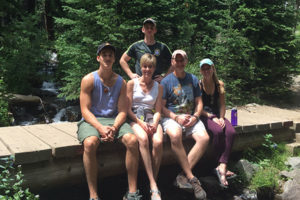 Three weeks earlier, my 24-year-old son Henry and his girlfriend, Emily, had been travelling and stopped to see friends in Colorado. On the morning they left to return home, a couple of their friends had fevers. Henry came down with a fever not long after. He was tired and lost his sense of taste and smell for several days. He had COVID-19. Or at least that’s what we believed. There was not a lot of testing at this time and he was not able to get tested. But we knew.

I was grateful his sickness was mild with no complications. I wasn’t so sure this would be the case with my husband. Tim is 53, very active, and very healthy except for that heart disease. Eight years ago he had two open heart surgeries to repair an aortic aneurysm, a 95% artery blockage, and to replace his heart valve. Even though it was early days in the pandemic, we knew that those with underlying health conditions like Tim could have a more difficult time with this virus.

Find resources to protect yourself

At first it was just a fever and extreme fatigue. But it seemed with each day came a new symptom. He developed a bad cough, lost his appetite, had shortness of breath, some nausea, and began having very strange dreams. He slept a lot. At one point, I went in to check on him in the room where he slept during his illness. He was curled up in the fetal position and could barely answer my question, “How are you feeling this morning?”

That was the day I cried.

But this didn’t just affect Tim. We had a full house. My daughter’s study abroad program in Italy was cut short, so she was home. Henry was home. His girlfriend came back with him from Colorado and had to stay because of her exposure to the virus. We didn’t want her exposing others. My middle son, Jack, who had to leave his senior year in college early, came ‘home’ to live with the neighbors for two weeks because we didn’t want him to get it either.

Each night I went to bed thinking, “I wonder if tomorrow will be the day I or another member of my family will wake up with a fever.” I had a daily ritual: wake up, wash my hands, wipe down every doorknob and light switch with a disinfecting wipe, clean the bathrooms, wash my hands again, check in on Tim and then have coffee and work from home. This was usually interrupted a few times with texts from family and friends also checking in on Tim. 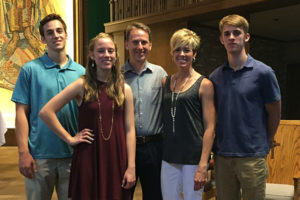 After that peak day, the day I cried, the day I almost took him to the ER if not for a calm nurse on the other end of the line at the OSF Call Center, he began to get better. I remember him saying, “I’m so tired of being sick.” And who wouldn’t be? Tim’s battle lasted for 12 days. In mid-June he got an antibody test, and just as we suspected, he had COVID-19. His test was positive for anti-bodies.

And the rest of us? I didn’t get it. Grace didn’t get it. Henry’s girlfriend didn’t get it. Grace and I confirmed this with negative antibody tests. How can that be, we wanted to know. We lived in the same house with a COVID-19-positive patient for 12 days. The only isolation we practiced was Tim sleeping in a different bedroom. I don’t know the answer to that question, but I do know this virus is real and I don’t want my family to relive this ordeal if someone else gets it.

Today, we all wear masks whenever we go out in public. Gladly. It seems a small inconvenience in exchange for possibly saving another life or sparing another family having to go through what we did.