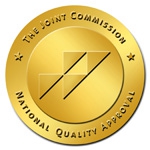 View Joint Commision's Accreditation Quality Report on Little Company of Mary Hospital where you will find the Gold Seal of Approval, our Centers of Excellence and Quality Scores. Click here to view the report.