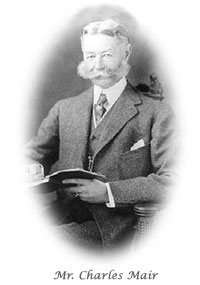 Mary Potter's vision manifested itself in America in 1893, when three Little Company of Mary Sisters, Mother Patrick, Sister Veronica and Sister Philomena, came to Chicago from Rome at the request of Charles Mair, a Chicago civic leader.

His support came in gratitude for the care his ailing wife had received from the Little Company of Mary Sisters while she vacationed in Rome. He built a convent for them at 4130 South Indiana Avenue. Mr. Mair even provided magnificent stained glass windows for their chapel.

That convent was eventually sold when the Sisters moved to a larger residence. The old convent chapel now houses the Tabernacle Missionary Baptist Church, under the direction of the Reverend Lou Rawls. The original stained glass windows have recently been relocated to the Hospital. Seven of the windows adorn our Heritage Corridor, located at the original, 1930 entrance to the Hospital. The remaining windows will decorate the soon-to-be-remodeled Regional Cancer Center.

The early Sisters traveled to the homes of the sick on Chicago's south side, providing nursing care, spiritual support and other assistance as needed. The Sisters soon found that there were many more people than they were able to care for. They were hindered by a lack of equipment and the limits of geography and travel. They needed to build a hospital...but where?

Their trust in divine providence and a certain sense of risk were tested when they acquired a tract of land in Evergreen Park, Illinois. The property was isolated and swampy, but it was all they could afford in the midst of the Depression.

The Sisters realized their dream on January 19, 1930, when a four-story, 150-bed hospital opened on that isolated property. Little Company of Mary Sisters, supported by 12 physicians, made up the entire staff when the hospital opened. 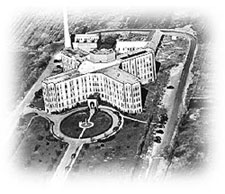 Since opening in 1930, more than 200,000 babies have entered the world at Little Company of Mary, earning it the nickname the "Baby Hospital."

The Hospital took its place in the history books in 1950 when Drs. Richard Lawler, James West and Raymond Murphy performed the first human organ transplant in the world. This successful kidney replacement allowed the patient to enjoy quality of life for the next four and one-half years. In 1996, the British Broadcasting System featured the story of this medical event in a four hour documentary, "Knife to the Heart," which told the history of transplant surgery.

1960- Cobalt Unit, a gift of the Auxiliary, opened

1963- Medical Intensive Care Unit opened, which is one of the first in the nation

2003- The Diabetes Center is dedicated

2011- Stroke Center Accredited by the JCAH