OSF St. Mary Medical Center owes its humble origins to a Galesburg priest who passionately petitioned The Sisters of the Third Order of St. Francis to bring their unique brand of delivering compassionate and reliable medical service to this growing community. 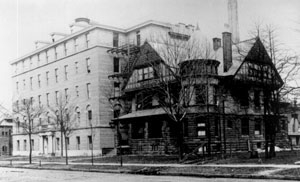 First St. Mary Hospital News in 1909 that the Sisters would open another hospital in Galesburg was met with great enthusiasm and financial support as the Sisters selected a judge's home downtown to house the initial hospital.

However, the Sisters always looked ahead as they remodeled this over-sized house to accommodate an elevator to connect this structure to a modern hospital facility that became a reality in 1914 when the first of many construction projects was completed.

Hospital Expands to Meet Needs of a Growing Community

The OSF St. Mary reputation as a caring institution spread throughout the region as it met the unique needs of a growing urban and rural population in central Illinois.

The hospital expanded again to meet increased demand around 1930.

Three decades later it continued to keep pace with modern medical practices and a changing and more health-conscious society.

Even after the major expansion in 1961, it became quickly evident that OSF St. Mary had outgrown its humble beginnings.

After extensive study, the institution made a bold move to construct a new hospital on what was considered far beyond the city limits on Galesburg's west side off Seminary Street.

The new OSF St. Mary Medical Center opened in 1974 with a seamless transition that served patients breakfast at the old location and lunch at the new site in the same day.

Growing for the 21st Century

In 2010, an expansion of the OSF Medical Group - Galesburg office, located on the hospital campus, was completed.

This expansion increased the space for primary care practices, provided a new home for our Occupational Health department, and created a new space for OSF St. Mary Outpatient Medical Imaging.

Also during that year, Galesburg Clinic joined the OSF HealthCare family. OSF Galesburg Clinic is the first multi-specialty physician practice in the community and includes two satellite locations, one on the campus of Knox College and the first office in Galesburg.

Even now, the new campus continues to evolve and expand with the latest in health care technology and advanced medical treatments while still adhering to the basic principles the Sisters followed when they opened the doors in 1909, "to serve with the greatest care and love."