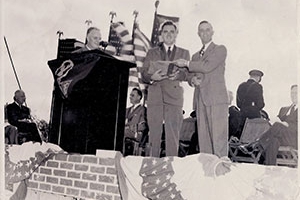 Mendota Community Hospital opened its doors at 1315 Memorial Drive on June 10, 1951. The hospital was named as a memorial to all who made the supreme sacrifice in World Wars I and II.

A bronze plaque located at the entrance to the building simply states, “A memorial to the heroes of our community we must not forget.” The laying of the cornerstone occurred on October 2, 1949. Residents, former residents, business people, and corporations of Mendota and the surrounding communities donated all the funds required to build and equip the original hospital. The hospital was, in every sense of the word, a community project.

Serving with the Greatest Care and Love 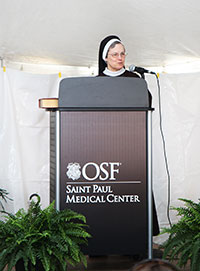 OSF Saint Paul Medical Center, the newest member of the OSF Healthcare System, was welcomed into the Ministry April 1, 2015, with a Blessing and Dedication Ceremony officiated by Msgr. Paul E. Showalter, vicar general of the Catholic Diocese of Peoria. The Blessing and Dedication culminated a nearly year-long transition process for the former Mendota Community Hospital, now the eleventh OSF HealthCare hospital.

Today OSF Saint Paul is one of the largest employers in the community with more than 300 employees on staff. Directed by a volunteer board, the Critical Access Hospital is an acute care non-for-profit corporation.