> Start with a free information meeting

So, you need to lose some weight? Listen to this.

Paul Thompson knew he was overweight. A former college athlete, Paul was well aware that this self-described “drive-thru diet” wasn’t healthy and that his obesity was contributing to chronic back pain and compounding his arthritis. But working 12-14 hours a day, mostly behind a desk as principal at Concordia Lutheran School in Peoria, was not exactly a weight-loss prescription.

Even hearing his primary care physician use the words “morbidly obese” didn’t shock him, though. No, what got his attention was hearing the doctor mention surgery as an option to lose weight.

“That was the wakeup call,” Paul said.

Shortly after his physical, Paul attended a meeting at the OSF Weight Loss Center. There, Dr. Cherie Hawkins suggested he was a good candidate for a program available through a partnership between OSF HealthCare and Health Management Resources (HMR).

Paul chose HMR’s most popular option, known as Healthy Solutions. It includes specifically prepared HMR meals and a daily regimen of at least five full cups of fruits and vegetables, 64 ounces of water and physical activity.

The average weight loss in the Healthy Solutions program is 35-40 pounds. Paul more than quadrupled that.

“Some have accused me of being competitive,” Paul said. “Basically, my doctor created a challenge, and I was going to win.” 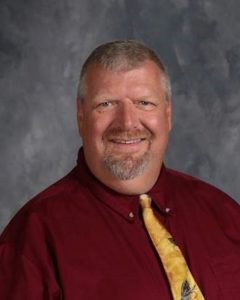 Paul grew up as the youngest of three children. He describes his mother as very petite, his father as average size and his early high school self as “scrawny,” at 155 pounds. But he played football and grew and continued that path at Concordia College in Nebraska.

“At 245 pounds, I was the smallest offensive tackle in the conference,” he said. “When your peer set is college offensive linemen, your view of body size can be a little distorted.”

After graduation, Paul became a teacher and coach. Even though he put on some weight, he stayed active on the football field in the fall, basketball court in the winter and around the track in springtime. But nine years ago, he got into school administration. His lifestyle changed, and his weight ballooned.

Now 51 years old, when Paul was faced with his defining moment, he summoned the discipline he had learned as an athlete. There would be no shortcuts and no excuses. He would follow the program. Period.

For years, Paul had been a daily regular at the drive-thru windows of nearby fast-food chains, usually for breakfast lunch and dinner. That stopped cold in mid-winter.

After February 5, 2019, he ate the HMR prepared meals, drank the shakes and supplemented those with ample fruits, vegetables and plenty of water. He religiously avoided the treats that appeared in classrooms to celebrate holidays and birthdays. When colleagues brought goodies to faculty meetings, Paul brought a banana or an HMR bar.

There’s a gym near Paul’s house. He was there to open it at 4:30 a.m., seven days a week. Every day, he would spend 90 minutes there: 45 minutes of resistance training, 45 minutes of cardio exercise. 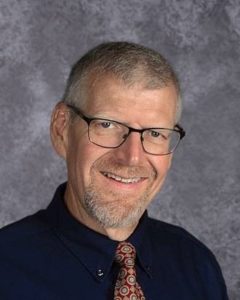 “They call it being inside the box,” Paul said. “I was always inside the box. That’s where my success came, with 100% adherence to the program.”

One week early on, Paul lost 14 pounds. Dropping seven or eight pounds in a week was not unusual. In a “bad” week, he would lose only three or four.

By the time the school year ended in May, Paul had lost 100 pounds – and people noticed. But the real shock came when the students returned in August. Paul had dropped another 65 pounds, and many kids and their parents thought the school had a new principal. Some even introduced themselves to him, as if they had never met.

There were other changes, too. Fun changes. Like not having to worry about crushing a folding chair or the bench seat in a friend’s fishing boat. Or hiking through the woods and climbing in and out of a deer stand without getting winded.

“You know those 40-pound bags of water-softener salt? Basically, I had been carrying around four of those everywhere I went,” Paul said.

Paul’s original goal had been to reach 175 pounds – half his peak body weight. But everyone, OSF HealthCare staff included, stopped him 10 pounds short. A Bod Pod test revealed his body-fat was barely 6%. Elite male endurance runners generally test in the 8% range. Under 5% is considered dangerous. 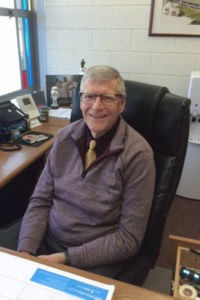 “They made me redo the test, and then I overheard them talking. They were debating if the machine was broken. It was hilarious,” Paul said.

So, Paul ended Phase 1 of the Healthy Solutions program in September and began the maintenance phase. He’s no longer on the HMR prepared meal plan, although he keeps a stash handy for emergencies. He has cut back to five days a week at the gym.

Paul said weight-maintenance has been more difficult than weight-loss.

The OSF Weight Loss Center emphasized the importance of changing and controlling your environment. So Paul installed a water cooler behind his office desk. He cleared out a cabinet in his book case and stocked it with healthy foods, measuring cups and the like.

“This is now my drive-thru window,” he said.

Then he lifted a camouflage backpack from the floor and opened it on his desk, revealing several servings of fruits, vegetables, apples, grapes, salad, proteins.

“And people tease me, but this is my lunch box.”