The first transfer of a patient by helicopter in Central Illinois occurred on January 10, 1967. This flight was also historic in that it was the first transfer of a prematurely delivered infant from one hospital to another by air in this state. The caregiver was one of the Sisters from the Third Order of St. Francis. The helicopter utilized was the Peoria based Journal Star’s news aircraft, a Hughes 300. The infant was transferred rapidly and safely in a small box secured beside the Sister.

The Journal Star helicopter continued to help with the transfer of premature infants until the early 1970s. As demand increased, an Illinois Department of Transportation helicopter began assuming the transport role of the critically ill or injured patients with a Bell 206 Jet Ranger, then Bell 206 Long Ranger, in the 1970s.

OSF Life Flight formalized in June 1984 to meet the rising demand for patient transfers. With a team comprised of three registered nurses each working a 24-hour shift at a time, they became the first dedicated transport nurses for OSF HealthCare Saint Francis Medical Center . 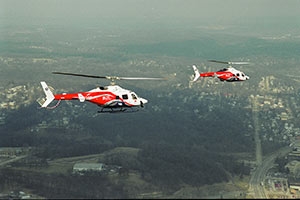 The program used a Bell 206 Long Ranger helicopter provided by the Illinois Department of Transportation. The helicopter was maintained off-site at the Journal Star’s hangar before relocating to Byerly Aviation at the Greater Peoria Region Airport. The Bell 206 is a single engine, single pilot helicopter capable of transporting one patient and two medical crew. Because the helicopter belonged to the state of Illinois, it was not dedicated to EMS missions and wasn't always available when transfer requests were received.

In October 1986, OSF Saint Francis leased its first dedicated helicopter because of the importance of transporting critically injured patients during the first hour following injury and the increasing number of transport requests. Again, a Bell 206 Long Ranger was leased from Omniflight Helicopters based in Janesville, Wisconsin. During this period, other flight programs were starting throughout the U.S. The rapid growth of helicopter programs expanded to include over 275 air transport programs, operating approximately 800 aircraft at some 650 bases. 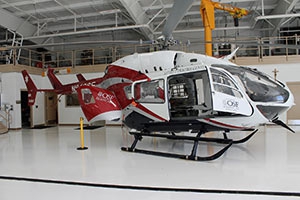 In 2012, OSF Aviation did a much-needed upgrade and purchased four American Eurocopter EC 145 helicopters. OSF Aviation also has its own Part 135 Certificate from the FAA.

We continue to work to provide excellent, quality care and service to our patients and our referral network. We are committed to the communities we serve. Through our ongoing relationships with EMS providers, referring hospitals, nurses and physicians in our region, we strive to make a difference.