Mary Potter was born on November 22, 1847, in Bermondsey, London, England. Her compassion for the sick and dying and her vision would change the lives of tens of thousands of people around the world. She had tremendous faith in God and an indomitable spirit.

Mary was the youngest of five and the only daughter. Her mother's strength of character and deep spirituality helped nurture and inspire Mary's own unshakable faith. 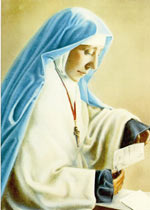 As a young woman, Mary Potter seriously considered marriage and was, in fact, engaged for a time. She eventually broke off the engagement so that she could devote her life to prayer and good works. She started by teaching at a school for Catholic children for three years. After class, she regularly brought food and comfort to the needy of the parish.

In December of 1868, at the age of 21, Mary Potter was accepted as a postulant by the Sisters of Mercy. However, within the year, Mary became ill and had to return home. During this first of many confinements, she asked other women to join with her in a ministry of care for the sick and dying. Despite many obstacles, Mary's faith and persistence eventually convinced Bishop Bagshawe of Nottingham to encourage her to find a suitable house with which to begin her mission.

Mary Potter and her initial four companions settled into a warehouse in Hyson Green, a very poor district of Nottingham. After much work remodeling the building Mary Potter had a cross erected atop the high roof on Easter Sunday, 1877. She painted it red to symbolize the blood of the Savior.

A Commitment to Compassionate Care

The Sisters of the Little Company of Mary were founded on July 2, 1877, the Feast of the Most Precious Blood. Their name and mission were inspired by Mary, the mother of Jesus, and the little company of faithful followers who remained with her at the foot of the cross on Calvary, offering Jesus and Mary their compassionate presence.

Because Mary Potter endured painful and chronic illnesses throughout her life. She intimately understood the emotional and spiritual distress of the sick and dying. She could empathize with their suffering. Serving the sick and poor of the community through compassion, home care and prayerful presence, these Sisters were pioneers in what we now call hospice care. Despite her illnesses, Mary Potter was gifted with the ability to inspire others to carry out her holistic ministry of physical, emotional and spiritual healing.

After years of building her Little Company, and having dedicated her life to the service of the sick and dying, Mary Potter went to her eternal reward on April 9, 1913. 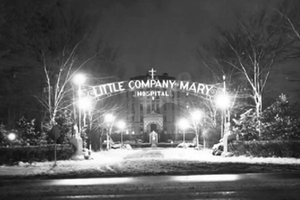 Mary Potter's legacy, and her wholehearted commitment to God were recognized by Pope John Paul II on February 8, 1988, when he declared Mary Potter "venerable," the first of three steps toward sainthood. This declaration demonstrated the Church's validation of Mary Potter's saintly life and acceptance of her extensive spiritual writings.

Mary's loving spirit continues to guide the work of her spiritual heirs today. The spiritual heritage of Mary Potter is carried on throughout the world.

We invite you to visit web sites of other Little Company of Mary facilities around the world.

Sisters of the Little Company of Mary