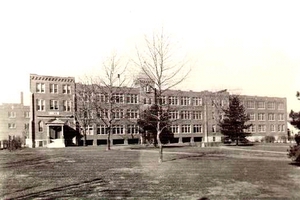 Saint Anthony's Infirmary circa 1925 Established by the Sisters of St. Francis of the Martyr St. George and now sponsored by the Sisters of the Third Order of St. Francis, OSF Saint Anthony's Health Center was founded in 1925 by five pioneering Sisters, who traveled from their General Motherhouse in Thuine, Germany to expand their mission to America. The story is told that they arrived with less than three dollars between them and one bag of oranges. But they were rich in faith.

Thanks to generous donations, the Sisters were able to purchase the Nazareth Home, a combination orphanage and infirmary in 1925, and they renamed the home Saint Anthony's Infirmary. In 1956, the organization became a fully licensed hospital, operating as Saint Anthony's Hospital. In 1959, construction on a new wing of the hospital was completed. More lay persons joined with the Sisters in caring for the sick. Midnight Mass marked the opening of the new chapel in 1964 and the West Annex was completed in 1966.