The Saint Francis Medical Center College of Nursing continues the history of nursing education started by The Sisters of the Third Order of St. Francis, Peoria, Illinois, whose Mission is to provide health care to the sick, injured and poor, as well as education for health care providers to the community of Peoria and surrounding areas. 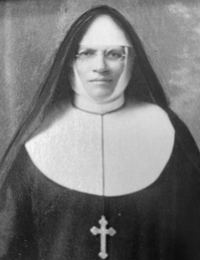 Sister M. Bernardine Krampe, O.S.F., was the first superintendent of the new nurses training school in Peoria for The Sisters of The Third Order of Saint Francis from 1905-12. St. Francis Hospital School of Nursing was organized in 1905, for Sisters only. The school's diploma program was approved by the State of Illinois in 1915, and opened to lay students in 1918. The School maintained continuous State approval of the diploma program. In 1950, the School received accreditation of the diploma program from the National League for Nursing (NLN) which continued through graduation of the last class in 1987.

Throughout its existence the School of Nursing contributed significantly to the profession of nursing through its graduates. From 1905 through 1987, approximately 3,400 students graduated from the diploma program.

Throughout the years, the school developed, enriched and improved its educational program based upon the needs of health care consumers and changing trends in nursing and health care. Examples of responses to changing needs in health care and education were: provision of a fast-tracked program for the U.S. Cadet Corps; participation in an Exchange Visitors Program for students from China; and the provision of courses for affiliate students from other nursing programs in Illinois.

The College of Nursing was established in November 1985, with approval of the baccalaureate program by the State of Illinois. The College enrolled its first students as juniors in August 1986. The first class graduated in May 1988. 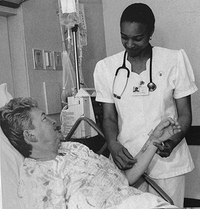 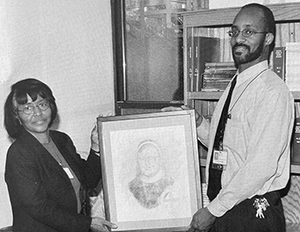 Dean Dr. Lois Hamilton, left, unveils a portrait of Sister Mary Ludgera Pieperbeck, O.S.F., painted by artist Duane Fisher, right, to commemorate the 2005 dedication of the Learning Resource Center named in her honor. In March 2000, the College received approval from the OSF Healthcare Systems board of directors to develop and implement a Master of Science in Nursing (MSN) program. In May 2001, the College received approval from the National League for Nursing Accrediting Commission (NLNAC) to offer a MSN program. In June 2001, NCA approved the program. The program of study is designed to provide baccalaureate professional nurse with current advanced knowledge and skill in Medical-Surgical Nursing with an option for either clinical practical or education.

In 2009 the College started the Doctor of Nursing Practice Degree. The College programs were granted accreditation with The Commission on Colligate Nursing Education (CCNE). The College offers through distance learning, some of the courses, which enable registered nurses the opportunity to fulfill the requirements for the baccalaureate degree. Summer 2000, the Illinois Board of Higher Education approved the use of video conferencing and web-based delivery of all courses required by registered nurses. The College of Nursing also received approval from the NLNAC in May 2001 and NCA in June 2001 to offer to registered nurses both baccalaureate and master's courses using distance education technology.