What started out as a redecorating project had grown into remodeling our home. My wife, Peg, and I would start with the kitchen and bathroom.

I started to get headaches when I was scraping the old paint off the bathroom ceiling. The project was uncomfortable, as I was constantly looking up and working above my head. I decided to limit the work to a few hours a day and hoped the headaches would subside when the project was done.

A few weeks later, I was out mowing the lawn and ended up with a nasty headache. It lingered for a while after I was done. I came in, had some dinner and went into the family room to relax.

All of a sudden, I started to have discomfort in the upper part of my chest. It then changed to sort of a breathing spasm which sort of acted in a “wave” that went up to my head. When it hit my head, it really hurt.

I told Peg I thought it was best if we went to the emergency department and get it checked out.

In the Emergency Department at OSF HealthCare Saint Francis Medical Center in Peoria, the triage group immediately put some EKG leads on me and started to draw blood. They didn’t see any unusual cardiac rhythms, and the blood tests didn’t show any of the enzymes you’d expect during a cardiac event. 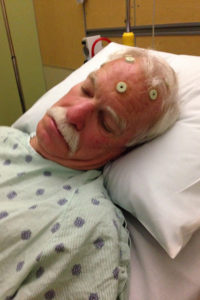 I wasn’t having a heart attack, so what was causing the pain in my head and chest?

There were lots of questions about the intensity of the triathlon training I had been doing. They wanted to know if I had been having any issues during the workouts. I told them I hadn’t, except for some shortness of breath when the intensity was really ramped up. However, my heart rate and shortness of breath quickly returned to an acceptable level when I took a break.

After spending the night in the ED, the only unusual thing doctors could find with my heart was an Atrial fibrillation (Afib), which I already knew I had. The cardiologist mentioned we really hadn’t determined what might be causing some of my headaches and suggested it may be a good idea to get a CT scan of my head.

After the scan, I was back in the ED and starting to doze off. I didn’t even realize when somebody came in and sat down next to me.

She was on my right side and Peg was on my left. She told us they found a mass in my head.

Peg and I were stunned. We never expected to hear those words.

My immediate reaction was to think the worst.

When the neurologist showed us the CT scan, he pointed out what he said appeared to be a meningioma – a type of brain tumor that is usually benign. We were somewhat relieved, but still scared to think this had been growing in my brain.

He told us meningioma are usually very slow-growing, and in most cases are discovered accidentally – like mine. He said in some cases doctors just monitor them, and in other cases they’re removed.

I was told I needed to see my primary care physician right away. Several other appointments were set up for me. I also needed to see the cardiologist and the neurologist, all within a week.

When I saw my primary care physician, he told me most likely the neurologist will want to remove the tumor because of its size. That was rather unsettling. 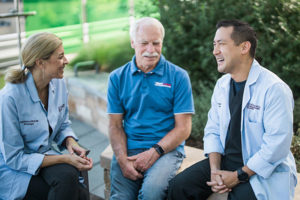 When I met with the neurosurgeons at OSF HealthCare Illinois Neurological Institute to discuss what approach we would take, I met with Sarah Beam, an advanced practice nurse, and Dr. Andrew Tsung, a neurologist who specializes in brain tumor. They told me my tumor – about the size of a plum – needed to come out.

They also told us this type of tumor is very slow-growing, and I had most likely had it for decades.

They covered how the whole surgical procedure would go. They reassured us Dr. Tsung does these procedures all the time, probably 300 of them a year. That was reassuring, but I was still scared. They answered all of the questions we had at that time.

Part of it was the standard pre-surgical prep, but I also needed to have another MRI. They put some small “Cheerios” on my head to serve as GPS markers for the surgeon during the procedure. After the MRI, Sarah stopped by to tell me a little more about what was going to happen.

Saying goodbye to Peg and my son, Nichol, was very difficult, but it was time to have Timmy removed. (Yes, I named my tumor Timmy.)

I was blown away by the surgical suite. I had been in operating rooms before, but this was something else. On one wall alone were five big-screen monitors. I even recognized Timmy on two of them.

After the surgery, Dr. Tsung met with my family to give them the good news that everything went fine. The tumor was easy to reach and came out in one piece.

I woke up in what they call the post-anesthesia care unit, or PACU. After previous surgeries, I remember waking up but drifting in and out of consciousness for a little bit. However, this time I didn’t want that to happen, so I really fought hard to stay awake. I was constantly moving my fingers, hands, toes, feet and legs. I had to prove to myself I still had control of my extremities.

Later, I was moved to what was called neuro intermediate care unit. 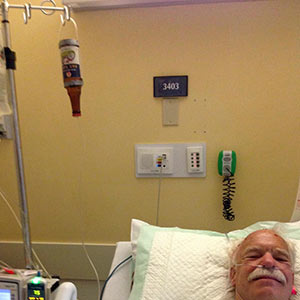 The night before my surgery I had decided to have a little fun and created my own custom IV. The IV was an empty Fat Tire beer bottle connected with some plastic tubing. After I got settled into the room and all the nurses were gone, I had Nichol hang it on the IV rack and run the tubing down to my right arm with all the other lines.

I was sitting in a chair the morning after my surgery when Sarah and Dr. Tsung came. They asked me how I felt, and I told them fine except for all the IV lines. They were updating me on how the whole procedure went when Sarah saw the custom IV behind me and pointed it out to Dr. Tsung.

They both started laughing, telling me they loved it and my attitude.

A little later, I was able to walk under my own power to the neuro general care floor. It felt so good to be moving again, and they were very encouraging to keep up the movement.

I really wasn’t having any pain, and everybody was somewhat surprised by that. I did ask for a pain pill just before going to bed for the night, but it wasn’t because I was having any issues. I just wanted to get a good night’s sleep since I didn’t get any sleep the night before.

I left the hospital 49 hours after my surgery. We got home and were feeling thankful when the doctor’s office called with the pathology report. It was the best news we could get: the tumor was benign and classified as level 1.

Overall, I came through this in excellent shape. I am pretty much back to normal (by my standards) but still a little weird – which is good. 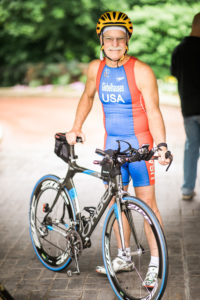 I’ve had two follow-up MRI scans since Timmy and I parted ways, and I am very pleased to report he’s never returned. No signs of anything growing back.

I had a lot of restrictions for a month, with really no training except for walking several times a day. I was a real good boy and abided by the restrictions and kept myself limited to four or five 15-minute walks each day. By August, I was able to get back on the bike and do some riding. I tried a couple of open water swims, but struggled with them.

I wasn’t able to get in as much biking as I wanted, but I was able to get in enough biking to do a weeklong bike tour in Utah with our son Nichol in September – about three months after my surgery. It was very challenging, as I really couldn’t train for the altitude – 7,000 to 8,000 feet with lots of climbing.

I started running again the week of Thanksgiving when we were in New Orleans. By December, I was back to swimming and biking three days a week. The workouts were intense but I was getting my fitness back.

I have done triathlons for decades, and I wasn’t going to let a little brain tumor force me in to retirement from doing something I love. In 2018, I was back at it doing five triathlons. And in 2019, I did another five.

The old man is back, just a little slower.