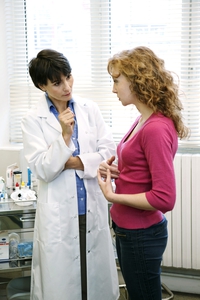 Gastroenterology is the study of the normal function and disorders of the esophagus, stomach, small intestine, colon, rectum, pancreas, gallbladder, bile duct and liver.

Some common services* include:

*Some services may not be available in all locations.

Some common procedures* include:

*Some procedures may not be available in all locations.

OSF Gastroenterology is the first in the area to offer EUS, the latest in ultrasound technology. Endoscopic Ultrasound (EUS) is a minimally invasive outpatient procedure.

Additionally, EUS allows for faster treatment time and can be managed on an outpatient basis.

During the procedure, patients will be sedated. A thin, flexible tube called an endoscope with a built-in miniature ultrasound probe will then be passed through the patient’s mouth or rectum to the area being examined.

The ultrasound will use sound waves to create visual images of the digestive tract. An EUS procedure generally lasts about an hour and requires fasting leading up to the procedure. Detailed instructions specific to the procedure will be given to the patient.

Why is Endoscopic Ultrasound used?

Treatment is another possibility with EUS. Abdominal pain related to pancreatic cancer and chronic pancreatitis can be relieved by performing a nerve block, and draining of pancreatic cysts can also be performed.

EUS is a safe procedure with minimal complications and most people are able to go home one hour after the procedure. Patients will need someone to accompany them to the procedure and to drive home afterwards due to sedation. Do not operate heavy machinery or drink alcohol for 24 hours after having the EUS procedure.

Patients will be able to return to their normal routines after 24 hours. Observations from the procedure will be discussed with patients prior to being discharged. If a biopsy was performed, results will be reported in a few days.

Do you have frequent indigestion or a burning sensation in the center of your chest? Do you regularly get sour or bitter-tasting fluids in your throat or mouth? Do you avoid lying flat or bending over to prevent acid from backing up into your throat?

If you answered “yes” to any of these questions, you might have chronic (more than twice per week) heartburn or gastroesophageal reflux disease (GERD). The heartburn may be so severe that it interferes with your daily routine. Frequent or chronic heartburn may be associated with GERD. Damage caused by GERD can lead to more serious medical problems such as difficulty in swallowing, narrowing of the esophagus, or Barrett’s esophagus.

Bravo pH monitoring is a minimally-invasive test for evaluation of heartburn and related symptoms. Your doctor will analyze results from this test to determine what is causing your symptoms and the best treatment to prescribe for you.

This test allows your doctor to evaluate your heartburn symptoms to determine the frequency and duration of acid coming up into your esophagus and to confirm if your condition may be GERD. The test involves attaching a miniature pH capsule, approximately the size of a gel cap, to your esophagus. Throughout the test period, the Bravo pH capsule measure the pH in the esophagus and transmits this information to a small receiver worn on your belt or waistband.

Barrett's esophagus is caused by injury to the esophagus from the chronic backwash of stomach contents (like acid and enzymes) that occurs with acid reflux. There are no symptoms specific to Barrett’s esophagus, other than the typical symptoms of acid reflux (or gastroesophageal reflux disease, also known as GERD).

Radiofrequency ablation (RFA) therapy has been shown to be safe and effective for treating Barrett’s esophagus. Radiofrequency energy (radio waves) is delivered via a catheter to the esophagus to remove diseased tissue, while minimizing injury to healthy esophagus tissue. This is called ablation, which means the removal or destruction of abnormal tissue.

While you are sedated, a device is inserted through the mouth into the esophagus and used to deliver a controlled level of energy and power to remove a thin layer of diseased tissue. Less than one second of energy removes tissue to a depth of about one millimeter. The ability to provide a controlled amount of heat to diseased tissue is one mechanism by which this therapy has a lower rate of complications than other forms of ablation therapy.

Diffuse liver disease is one of the major health problems in the world. It can result from many causes, including viral hepatitis (hepatitis B or hepatitis C), non-alcoholic or alcoholic fatty liver disease, autoimmune hepatitis, drug-induced liver injury, primary biliary cirrhosis and several other less frequent etiologies. Chronic liver damage results in hepatic fibrosis that can progress to cirrhosis.

Accurately staging the degree of liver fibrosis is extremely important to determine the type of therapy, predict treatment outcome and determine malignant potential.

The gold standard for diagnosing liver disease and determining the staging of liver fibrosis has been liver biopsy. The biopsy is an invasive procedure with potential complications of bleeding and severe pain.

Liver elastography involves the use of a surface ultrasound probe that delivers a low frequency pulse or shear wave to a small volume of liver tissue under the rib cage. A technician places the probe between the ribs on the right side of the lower chest wall. A series of 10 painless pulses are then applied to the liver.

The results are recorded on the equipment and an overall liver stiffness score is generated. This score is then interpreted to predict the likelihood of advanced fibrosis or cirrhosis. The transmission of the sound wave is completely painless. In select patients, elastography may eliminate the need for liver biopsy for staging fibrosis.

What Patients Should Know

Patients are asked to lie flat on an examination table. They are asked to wear loose clothing and should not consume any liquids or solids for a minimum of three hours before the test to increase the likelihood of obtaining reliable test results.

The scan will take 10 to 15 minutes to complete, but patients should plan on being available for 30 minutes to allow time for preparation.

For a consultation with our office, a referral from a primary physician is strongly encouraged. Our front desk staff recommends that patients also check with their insurance company to see if a referral is required by their plan.

For colonoscopies and EGD's, patients will be given specific instructions for procedure preparation such as scheduling and dietary restrictions.