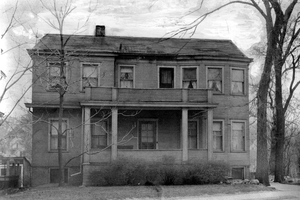 708 S. Adams Street 1875 – Our founding Sisters’ journey to the United States began in Germany, where they cared for children in an orphanage surrounded by extreme poverty. The Sisters were forced to leave after the "Iron Chancellor" of Germany sought to expel all religious groups. The Sisters came to the United States and ended up in Iowa City, Iowa, where they cared for orphans. They endured poverty so severe that they were forced to go on begging trips in order to have enough money to care for the children. On one such trip, they found their way to Peoria, Illinois where the Sisters met a German priest. The priest knew that Peoria desperately needed someone to care for the sick and asked them to stay. They returned to Iowa City where they were granted permission to return to Peoria and begin their new mission.

1876 – The Sisters begin caring for patients, in this home at 708 S. Adams Street in Peoria, on November 4. They took their ministry of caring for the ill into the community and suffered extreme poverty, prompted by the Franciscan custom of not charging for their services. 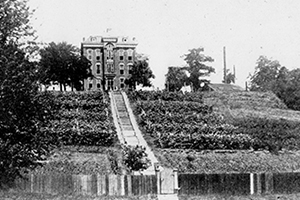 The property on the bluff before renovations.

1877 – The first bishop of the newly created Peoria Diocese arrived in Peoria. He suggested the Sisters form a new order. On July 16, 1877 the ten Sisters took the name of The Sisters of the Third Order of St. Francis. In August, the Sisters acquired the property at 248 Bluff (now Glen Oak Avenue), which was owned by Lydia Moss Bradley (founder of Bradley University).

1885 – To satisfy space needs, a north wing is added boosting the bed count to 53 and giving the Sisters a long-awaited chapel.

1890 – A south wing is added giving the hospital 95 beds, a kitchen, boiler room and a laundry room. 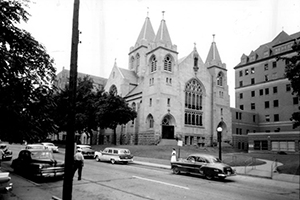 The Chapel of St. Francis.

1942 – A new, eight-story building replaced the original hospital on the bluff. It housed dietary, surgery, the psychiatric department, the lab, the orthopedic department and the delivery room. The hospital now has 500 patient beds.

1951 – In December, doctors repair the aorta of a three-month old infant in the first heart surgery of its kind in Peoria. The baby's aorta had divided into two vessels and encircled his windpipe and esophagus.

1954 – On June 27, a new, 100-bed Children's Hospital is dedicated, the result of the first capital campaign in the history of OSF Saint Francis.

1968 –  A seven year modernization and building project costing $7,000,000 was completed. It included the demolition of the oldest remaining portion of the hospital, adding two floors onto the Children's Hospital, a generator, a new emergency department, a 228-seat auditorium, lab, X-ray department, and board room. By the end of the year, St. Francis Hospital is an 800-bed facility. 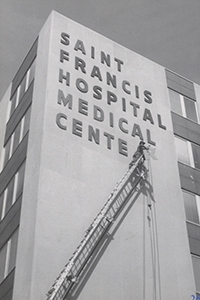 1973 – On February 1, two doctors performed the first open heart surgery Peoria on an 18-year-old woman who had a hole in her heart.

1976 – St. Francis acquires an EMI scanner, a radiological instrument to aid in the diagnosis of brain disease and injuries. The only one in Peoria, it is best known as a computed tomography (CT) scanner, it combines the speed and accuracy of a digital computer with highly sensitive X-ray detectors.

1982 – The Radiology department installs a whole body CT scanner in March. The word "hospital" is dropped, as the institution's official name becomes Saint Francis Medical Center. In December, the medical center makes national news when it performs hemodialysis treatment on the smallest infant ever to be dialyzed. The little girl weighed 1 pound, 12 ounces.

1985 – On July 14, Dr. Beverley Ketel performs the first kidney transplant in central Illinois. Saint Francis introduces the lithotripter to Illinois with the opening of the Kidney Stone Center in June. The lithotripter is a non-invasive method of disintegrating kidney stones.

1986 – About 12,000 people attended the four days of opening festivities for the new addition to the medical center. It was announced that day that the building would be called the Gerlach Building in honor of Sister M. Canisia Gerlach, O.S.F., hospital administrator since 1960.

1987 – Peoria's first heart transplant took place at the medical center on April 27. On March 2, quintuplets are born at Saint Francis ranging in weight from one pound, 12 ounces, to two pounds, three ounces.

1989 – Saint Francis becomes the first Illinois hospital to mobilize a Cardiac Catheterization Laboratory, at a cost of $1.1 million. It is also announced that Saint Francis will form the Central Illinois Cardiac Emergency Network, which involves 12 hospitals and medical centers.

1990 – The formation of the Children's Hospital at Saint Francis Medical Center is announced. The Illinois Neurological Institute is formed to consolidate neurological services and improve clinical care, research and education in this field. The Susan G. Komen Breast Center opens. Saint Francis is the first downstate hospital with the diagnostic tool of flow cytometry, laser technology that examines cell interiors.

1995 – To create a system identity, the letters "OSF," representing Order of St. Francis, are added to the name of each medical center, including OSF Saint Francis Medical Center.

1997 – In February, the creation of the OSF Stroke Network is announced with 13 hospitals as charter members. With Dr. David Wang as director, it is the first such network in the United States to adopt uniform treatment protocols for stroke victims.

1998 – The Mother M. Frances Krasse Family Health Center is dedicated on July 16. The $2,000,000 facility on Peoria's south side began seeing patients in August. 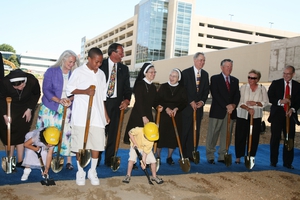 2000 – On February 15, a groundbreaking is held for RecPlex (later named RiverPlex), a joint effort between OSF Saint Francis and the Peoria Park District. The first use in central Illinois of an advanced heart procedure, transmyocardial revascularization, or TMR takes place. The Jim and Trudy Maloof St. Jude Affiliate Clinic is relocated to Children's Hospital in November.

2007 – In July, groundbreaking ceremonies were held on the downtown campus of OSF Saint Francis Medical Center as the Milestone Project officially began. The $234 million modernization and expansion of the medical center and Children’s Hospital of Illinois will take three years to complete. Three of the floors of the 440,000-square-foot building will be dedicated to Children’s Hospital, with one floor serving adult cardiac patients. The other four floors of the eight-story facility will contain services for both adults and children, including: surgery, emergency medicine and an admitting and lobby area. The St. Jude Affiliate Clinic will also move to the new building.

2010 – Ten days of events surrounded the opening of the new Children's Hospital of Illinois/OSF Saint Francis Medical Center. The Bishop of the Peoria Diocese and political dignitaries attend the events. The project ends up costing $287 million dollars and is the largest construction project in the history of Peoria at this point.