Endovascular therapy is a minimally invasive way to diagnose and treat a patient from within a blood vessel. In the case of a brain aneurysm, this treatment is called coil embolization, or "coiling."

Coiling does not require open surgery. Instead, physicians use real-time X-ray technology, called fluoroscopic imaging, to visualize the patient's vascular system and treat the disease from inside the blood vessel. 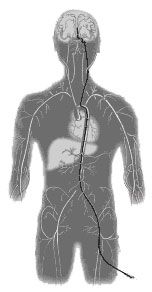 Coil Embolization Coiling involves insertion of a catheter into the femoral artery in the patient's leg and navigating the catheter through the vascular system into the patient's head and to the aneurysm. The entire process is done using continual X-ray visualization and high-speed radiographic filming techniques.

Once the physician has detected the presence, size, and location of the aneurysm, a smaller "microcatheter" is then placed inside the initial catheter. When the microcatheter has been successfully navigated into the aneurysm opening, the coiling system is introduced.

After the aneurysm has been packed, the catheters are removed and the patient is transferred to Intensive Care for monitoring and further care.

Patients with a ruptured aneurysm have a longer stay in Intensive Care, typically 10 to 14 days.

When Time is Critical, Experience Matters

When a patient is diagnosed with a brain aneurysm, time is critical. There is a 50 percent chance of mortality and morbidity after the first rupture of an aneurysm; that number increases to 75 percent after a second rupture.

When your patient is in need of treatment, the OSF St. Joseph Medical Center team is immediately available with the experience and expertise you expect.

In addition, research has shown that for patients equally suited for both open surgery and coiling, endovascular coiling treatment produces substantially better patient outcomes than surgery in terms of survival free of disability at one year.

The relative risk of death or significant disability one year after a patient is treated with coils was 22.6 percent lower than in surgically-treated patients*.