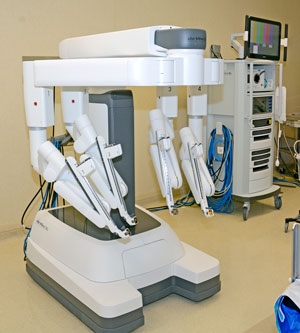 You've just been diagnosed with a condition requiring surgery. Until recently, options included traditional surgery with a large open incision or laparoscopy, which uses small incisions but is typically limited to simple procedures.

Now at OSF HealthCare St. Joseph Medical Center, there is another option – a minimally invasive alternative to both open surgery and laparoscopy. Through use of the da Vinci® Surgical System, our surgeons are now able to offer a minimally invasive option for complex surgical procedures.

The da Vinci System allows for major surgery to be performed through the smallest of incisions. For you, this means less pain, a shorter hospital stay, faster return to normal daily activities, as well as potential for a better outcome.

The da Vinci System is a sophisticated robotic platform designed to expand the surgeon's capabilities.

With da Vinci, small incisions are used to introduce miniaturized wristed instruments and a high-definition 3-D camera. From the da Vinci console, your surgeon views a magnified, high-resolution 3-D image of the surgical site. At the same time, state-of-the-art robotic and computer technologies scale, filter and seamlessly translate your surgeon's hand movements into precise micro-movements of the da Vinci instruments. The System cannot be programmed, nor can it make decisions on its own. Rather, the da Vinci System requires that every surgical maneuver be performed with direct input from your surgeon.

Surgery with the da Vinci Surgical System may not be appropriate for every individual. Always ask your doctor about all treatment options, as well as their risks and benefits.

The da Vinci Surgical System is the only commercially available technology that can provide surgeons with the precision, dexterity and control of traditional open surgery, while only requiring 1-2 cm incisions. The da Vinci Surgical System consists of an ergonomically designed surgeon’s console, a patient cart with four interactive robotic arms, a high-performance vision system and patented EndoWrist instruments.

At the da Vinci console, your surgeon operates while seated comfortably, viewing a highly magnified 3-D image of the body’s interior. To operate, the surgeon uses master controls that work like forceps. As controls are manipulated, da Vinci responds to their input in real time, translating their hand, wrist and finger movements into precise movements of miniaturized instruments at the patient-side cart.

The patient cart holds up to three EndoWrist instruments and one 3-D camera. To access the target anatomy, your surgeon introduces the EndoWrist instruments into the body through a series of dime-sized incisions. A broad range of instrument types are available to help surgeons perform specialized surgical tasks with precision and control. Since the patient cart does the work of holding and repositioning the instruments and camera – and because surgeons operate while seated – they experience much less fatigue in performing surgery with the da Vinci System.

When considering surgical treatment options, many patients have concerns about safety. In particular, patients question whether da Vinci Surgery is as safe as traditional methods.
In fact, the da Vinci Surgical System has been used successfully in tens of thousands of minimally invasive procedures worldwide. In addition, da Vinci offers multiple, redundant safety features, which make the most effective, least invasive approach potentially as safe as traditional surgical methods.