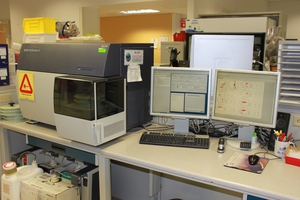 BD FACSanto II Flow Cytometry Analyzer Hematology is the branch of medicine concerned with the study, diagnosis, treatment, and prevention of diseases related to the blood.  It involves treating diseases that affect the production of blood and its components, such as blood cells, hemoglobin, blood proteins and the mechanism of coagulation.

Some examples of tests performed in the hematology department at the OSF HealthCare Saint Francis Medical Center Laboratory include:

Coagulation tests measure the ability of blood to clot, as well as how long it takes. They are usually ordered when someone is experiencing abnormal bleeding or bruising.  Testing can assess the risk of excessive bleeding or the formation of clots (thrombosis) somewhere in the blood vessels.

Prothrombin time (PT), International Normalized Ratio (INR), Activated Partial Thromboplastin Time (aPTT), and Thrombin Time (TT) tests are sometimes ordered before a patient undergoes surgery or to check medication levels, such as in patients who are on anticoagulant drugs.  D-dimers are ordered to check for thrombotic activity and disorders by measuring a small protein fragment of a degraded blood clot.

*< 1 day TAT for a local client means tests are generally resulted in a matter of hours, including transport time.

Factor activity may be measured when someone is suspected of having an acquired condition that is causing bleeding, such as  vitamin K deficiency or liver disease.  Sometimes factor testing may be done on a person with a known deficiency to monitor the factor deficiency and to evaluate the effectiveness of treatment.  A few of the Factor assays performed routinely are:

Many clinical conditions can lead to unexplained bleeding and can be tested for as well.  Some examples are: