Respiratory failure occurs when the amount of oxygen that moves from your lungs into your blood stream is insufficient and does not allow your heart, brain and other organs to function normally.

When you breathe, the air sacs (alveoli) in your lungs push the fresh oxygen into your blood and exchange it for carbon dioxide, which is then expelled when you exhale. 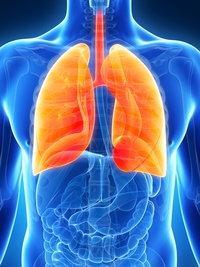 When the carbon dioxide levels exceed oxygen levels, the imbalance in those blood gases compromises your respiratory system.

There are two basic types of blood gas imbalance:

Respiratory failure can be short-term (acute) or ongoing (chronic).

Acute failure demands immediate attention and often is treated in the emergency department.

Chronic failure develops over months or even years, and treatment varies depending on the severity and other existing conditions.

We generally don’t think about breathing; we do it spontaneously. But the respiratory system reaches into every part of your body, from your brain to your feet, and the act of breathing – and making a proper oxygen-carbon dioxide exchange – can be affected by many different events and conditions.

Causes of respiratory failure include:

Because respiratory failure deprives your organs of oxygen, symptoms can reach far beyond shortness of breath.

For example, oxygen deprivation can affect brain activity. Some of the varied symptoms include:

To determine whether you are experiencing chronic respiratory failure, your provider will review your medical history and order testing, which could include:

The goal of all treatment for respiratory failure is to restore the balance of blood gases in your system, address the underlying cause of your problem and help you breathe normally again.

You can live with chronic respiratory failure by successfully managing the symptoms.

First and foremost, if you are a smoker, quit. OSF HealthCare provides free smoking cessation programs. We simply want you to quit.

Talk to your provider about pulmonary rehabilitation programs, which are designed to help you exercise and keep your body moving. Create an emergency plan, in case your symptoms become acute and require immediate attention.

Treatment for chronic respiratory failure depends on its severity, as well as other health conditions you might have. Among the treatments your provider may prescribe: